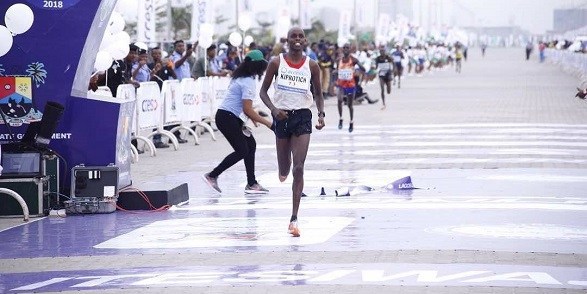 Share this on WhatsApp
Spread the love
Kenyan Eliud Kipchoge sets a new marathon world record in Berlin on Sunday, smashing the previous best as he clocked 2hr 1min 40sec,National Daily learnt.
The 33-year-old Olympic champion, aided by a string of pacemakers through to 25km of the 42.195km race, took 1min 17sec off the previous best set four years ago by Dennis Kimetto.
It was the largest single improvement on the marathon world record since Derek Clayton improved the mark by 2:23 in 1967.
“My only words are ‘Thank you!’,” said Kipchoge.
Acclaimed as the greatest marathon runner of the modern era, Kipchoge has dominated marathon racing since making his debut in Hamburg in 2013 after a successful track career that saw him win world gold and silver (2003, 2007) in the 5000m and Olympic silver and bronze (2008, 2004) over the same distance.
He has notched up 10 wins from the 11 marathons he has raced, winning three times not only in Berlin but also London, with victories in Rio for Olympic gold as well as in Hamburg, Rotterdam and Chicago.
Share this on WhatsApp