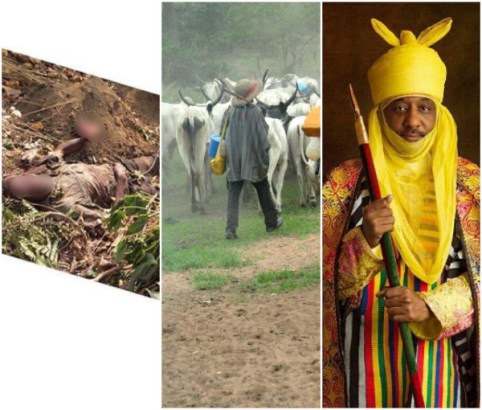 Emir of Kano Sanusi Lamido Sanusi has urged the Miyetti Allah Cattle Breeders Association of Nigeria to expose the criminal elements among them.
Sanusi told MACBAN on Sunday in Minna, during a national executive meeting of the association.
The monarch, a patron of the umbrella body for Fulani herdsmen, worries that the group has been dubbed a criminal organisation.
He urged Nigerians to avoid ethnic profiling whenever a crime was committed, noting that “criminals have no tribal marks.”
At the meeting were other patrons like the Lamido of Adamawa, Muhammadu Barkindo Musdafa, Prof. Ango Abdullahi, Dr. Aliyu Tilde and other stakeholders.
He urged MACBAN to also liaise with the  governors of Niger, Kogi, Nasarawa and Kano states who have indicated interest to allocate grazing reserves, with a view to developing them.
The zonal chairman of the MACBAN’s National Executive Committee, Alhaji Gidado Siddiki, said that “conflict between herdsmen and farmers has a long history; the solution has been to engage all stakeholders to find an amicable solution to the conflict.”
Siddiki commended some soiutheastern governor who have been able to effectively stem the recurring clashes between farmers and herders at a time their peers and the Federal Government are at a loss on how to handle the clashes.
The governors are Willie Obiano and Ifeanyi Ugwuanyi of Anambra and Enugu states respectively.
Fulani herders and their patrons have been subjects of criticism and public debate over a period of time now, especially since Jan. 1 when over 70 people were killed in two communities sacked in Benue.
Many have accused President Muhammadu Buharim another patron, of overlooking the menace of the herdsmen’s violence most rampant now in Adamawa, Benue, and Taraba.