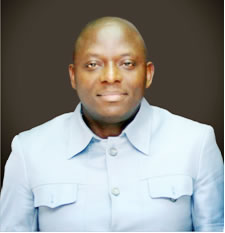 Share this on WhatsApp
Spread the love
The former Director General of NIMASA, Patrick Ziakede Akpobolokemi, appeared in court on Thursday with crutches, indicating he is ill, to answer to a 40-count charge of alleged N13 billion fraud against him by the Economic and Financial Crimes Commission (EFCC).
The 40-count charge include the conversion of N601, 516.13 and $1, 766, 428.62, property of NIMASA, into private concerns; conversion of NIMASA’s N27,690,113.79 and $17, 491, 378.64, as well as another N27, 690,113.79 and $17, 491, 378.64, belonging to the agency to personal use, an offence contrary to section 15 (1) of the Money Laundering (Prohibition) (Amendment) Act 2012 and punishable under section 15(3) of the same Act.
The EFCC had explained that it rearrested Akpobolokemi after he was granted bail by a competent court because of fresh N34 billion fraud allegations against him.
Some other detainees in EFCC custody include: National Security Adviser (NSA) to former President Goodluck Jonathan, Sambo Dasuki, had requested for bail to travel overseas for medical treatment. Former PDP Chairman, Haliru Bello Mohammed, also appeared in court for his trial in a wheel chair having been conveyed to the court in an ambulance. Former coordinator of the Amnesty Program has refused to return to Nigeria to face trial since he traveled to the United States of America on the premise of medical treatment. He was said to have sent picture of his sick bed when the EFCC invited him for questioning last year.
It was gathered that many stakeholders consider it bizarre “how former office holders in the country who showed no public sign of infirmity when in power suddenly develop serious illness when under the beam of the EFCC.”
Share this on WhatsApp
Related Topics:EFCCNIMASAPatrick Ziakede Akpobolokemi
Up Next