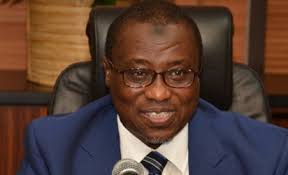 Share this on WhatsApp
Spread the love
Governors of the 36 states have faulted the Nigerian National Petroleum Corporation (NNPC) over the amounts it claimed to have paid as subsidy on fuel and other unapproved spending.
Recall that the Federation Accounts and Allocation Committee (FAAC) had suspended its meeting indefinitely over allegations that the NNPC failed to remit what was due to government coffers.
The allocations of May and June are yet to be distributed among the three tiers of government following the rejection of the NNPC remittances.
The NNPC had remitted N147 billion into the federation account in May but the governors faulted that amount, saying it did not reflect the current economic realities and prices of oil in the international market.
The governors, who held a meeting in Abuja on Wednesday night, said their final decision on the issues would be presented at Thursday’s national economic council (NEC) presided over by Vice-President Yemi Osinbajo.
Briefing journalists on the outcome of Wednesday’s meeting, Abdulaziz Yari, Chairman of the Nigerian Governors’ Forum and Zamfara state governor, said the governors still disagreed with the figures presented by the oil corporation.

“There is a disagreement between the figures presented. I have been on the saddle for seven years and I have been attending NEC for past four months and if I see discrepancies, I should be able to tell,” he said.

According to Yari, the agreement NNPC claims to have with state governors to remit a maximum of N112 billion per month was done when oil price was $48 barrel per day but now the price $78.

He said NNPC claimed to have paid N88 billion for subsidy and in the month of June, out of which N57 billion was for subsidy payment in 2017. “That is not acceptable and we won’t give the approval. You can’t just deep your hand into the public purse and take the money, you have to seek approval from the NEC or Mr. President.”

“And NNPC said they have N15 billion for miscellaneous, N9 billion for pipeline maintenance, N3 billion for crude loss, all those things were not approved by anyone.”

He said NNPC being a public corporation jointly owned by the federal, states and local government shouldn’t be spending money without getting approvals.