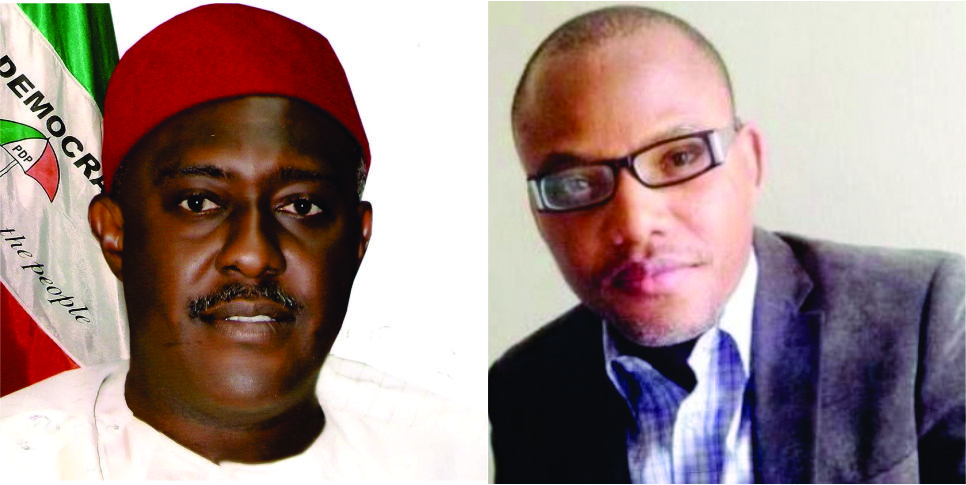 THE Public Interest Lawyers League (PILL) has said the federal government has not disregarded the judiciary in any way by holding unto Nnamdi Kanu and OlisaMetuh detained by the DSS and EFCC respectively.
“As far as we are concerned, there’s no order being presently violated in Kanu’s and Metuh’s case,” Abdul Mahmoud, PILL’s president, toldthe National Daily.
Kanu, leader of the Indigenous People of Biafra accused of terrorism, has been in the hold of the secret service for over three months while Metuh, PDP’s spokesperson embroiled in an arms purchase scandal, has spent about two weeks in EFCC’s coop.
The perceived abuse of power by the federal government has spawned some movements, including that of Carol Ajie, a human rights lawyer, who submitted a petition signed by 4000 Nigerians to U.S President Barrack Obama Thursday.
Ajie and the signatories (gathered from the online polling platform Change.org)are asking Obama to prevail on his Nigerian counterpart Muhammadu Buhari to respect court orders, uphold the Nigerian constitutionor resign.
Femi Falana, a rights lawyer and diehard supporter of Buhari’s before now, has also expressed concern about continued detention of Metuh, Kanu, and even the ex-NSA Sambo Dasuki accused of stashing away $2.1 billion arms vote.
“There is no provision for keeping criminal suspects at the pleasure of security officials. Meanwhile, all valid and subsisting orders made by courts in favour of criminal suspects should be obeyed without further delay,” he wrote in an article published on Sahara Reporters.
Other critics have latched ontoBuhari’s statement during his first Presidential Media Chatthat those granted bail by the court would not be released because he of the gravity of their offence. “If you see the atrocities these people committed against this country, we can’t allow them to jump bail,” he said.
The PDP has also consistently rapped President Buhari, the APC, and the EFCC for muzzling the opposition by keeping their party man Metuh in detention over his involvement in the $2.1 billion arms purchase scandal whirling around ex-NSA Sambo Dasuki and former President Goodluck Jonathan.
But PILL, however, noted that despite the absence of court orders, the refusal of the EFCC to charge Metuh to court is an abuse of section 35 of the Constitution of the Federal Republic of Nigeria.
“Our view is that if the government is convinced by its cases, it should diligently pursue them in court, rather on the pages of newspapers,” Mahmoud said.
The EFCC, however, charged Metuh to court on Thursday, after his suit challenging his detention, and an application for a speedy hearing, were turned down Wednesday by Justice OkonAbang of the Federal High Court, Abuja.
In the seven-count charge of corruption, Metuh was alleged to have obtained N400 million from Dasuki through one DESTRA Investment Ltd, and has given some of the money with Tony Anenih, PDP’s Board of Trustees ex-chair.
For Dasuki’s case, Mahmoud said the failure of the DSS to file a new charge since he was arrested he was arrested at the Kuje Prison makes every day he’s being held by the DSS illegal. “It is an abuse of the court order that admitted him to bail.”