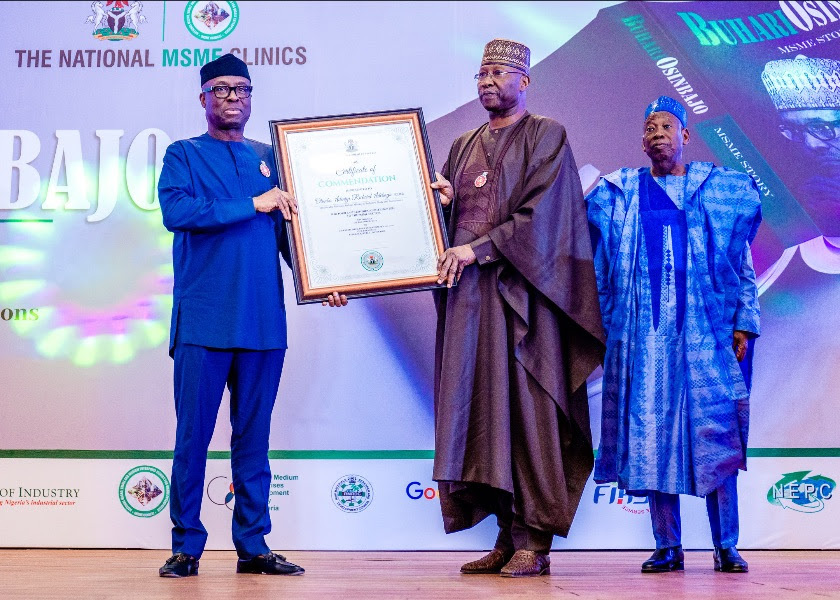 Vice President Yemi Osinbajo says the federal government through the collaboration of State governments and stakeholders, has been able to address key challenges faced by Micro Small and Medium Enterprises (MSMEs) in Nigeria and record significant gains for socioeconomic development, while also providing a template for support to the sector that could be used by governments and other stakeholders around the world.

Osinbajo stated this while speaking at the of a Compendium of MSMEs interventions by the Buhari administration titled, “Buhari – Osinbajo: The MSME Story.” The Compendium was compiled by Mr. Tola Johnson, the Special Presidential Assistant on MSMEs.

The Vice President, who was represented at the event by the Secretary to the Government of the Federation, Mr. Boss Mustapha, noted that the endeavour and desire to succeed shown by Nigerians in the MSMEs sector has also contributed greatly to the country’s socioeconomic development.

“Ultimately, it is the MSMEs that we must celebrate. It is their entrepreneurship, endeavour and desire to succeed that makes our small business sector so vibrant.  It is indeed their passion and drive that made the MSME Clinics dynamic, vibrant and successful,” he said.

Prof. Osinbajo reiterated that the growth and development of MSMEs in the country remains a core objective of the Federal Government under President Muhammadu Buhari, evident from the successes recorded so far in the sector.

According to him, “this book goes to show us that with the right team, right attitude and commitment to achieving our objectives, it is possible to place the interests of MSMEs at the very heart of government policy at all levels.

“What seemed challenging seven years ago has turned into a positive story and provides a template for governments around the world to support small businesses.”

Since the scheme was launched to support and ensure the growth of MSMEs nationwide, the Federal Government has so far held MSMEs Clinics in 30 States. Also, in partnership with State Governments, 5 Shared Facility centers have been established in the country for small businesses.

Continuing, the VP noted that “these programmes are anchored on a partnership model that recognises the fact that the activities of several MDAs impact on the business fortunes of MSMEs.

“Another key part of the partnership template was the active participation of the 36 State Governments and the FCT, the base and home of our MSMEs.”

The Vice President also commended the commitment of the beneficiaries of the Clinics and other interventions, noting their steadfastness.

Earlier in her review of the Compendium, the Minister of State- Industry, Trade and Investment, Ambassador Mariam Katagum, said the photographs showing the Vice President flagging off intervention schemes for MSMEs across the country, reflects the importance the government attached to the development of the sector.

She said the Vice President’s interaction with MSMEs during the nationwide Clinics and other programmes typified the commitment of the Buhari administration to MSME development over the years.

Other dignitaries present at the event were Governor Abdullahi Ganduje of Kano State, Minister of Industry, Trade and Investment, Otunba Niyi Adebayo; the representative of BUA Group Founder and Chairman, Alhaji Abdulsamad Rabiu; heads of partner agencies, representatives of development partners, the Diplomatic Corps, among others.