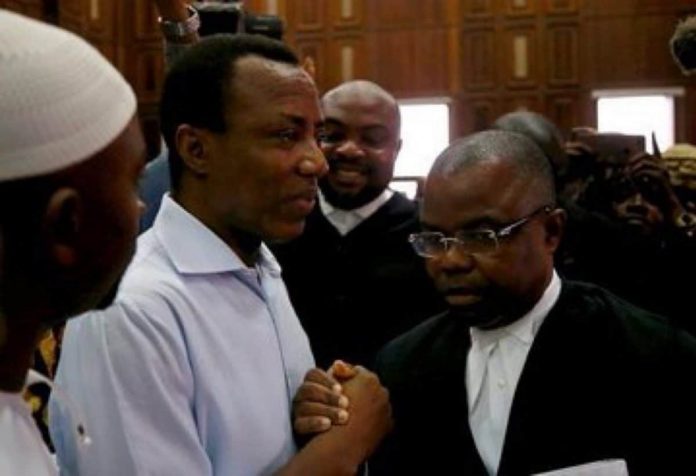 The Attorney-General of the Federation, AGF, and

Minister of Justice and AGF Abubakar Malami has directed the Department of State Service to hand over the prosecution of Omoyele Sowore, convener of RevolutionNow Movement.

The AGF, through his media aide Umar Gwandu,  ordered the DSS to forward the case file in respect of the charge pending against Sowore before the Federal High Court in Abuja, to his office.

In the order released on Friday, Malami insisted that the Federal Government was committed to respecting the sanctity of the rule of law, protecting the virtues of human rights and ensuring speedy dispensation of justice in the matter.

“As part of deliberate efforts to probe emerging issues related to the recent imbroglio related to Omoyele Sowore’s case and for speedy dispensation of justice, the Attorney-General and Minister of Justice has requested that the case file in respect of charge pending before the Federal High Court, Abuja be forwarded to his office, ” he said.

The request for the transfer of the case to the office of the AGF was contained in a letter dated December 11, 2019, and addressed to the Director-General of the DSS, National Headquarters, Abuja.

The Solicitor General of the Federation and the Permanent Secretary, Federal Ministry of Justice, Dayo Apata, SAN, who signed the letter, referred to an initial letter the DSS wrote to the AGF on September 9, 2019.

According to the statement, Apata’s letter to the secret service, read: “The Honourable Attorney-General of the Federation and Minister of Justice upon a further review of the case has directed the immediate takeover of the prosecution of all charges in respect of Omoyole Sowore by the Federal Ministry of Justice in line with the provisions of Sections 150(1) and 174 (1) (a-c) of the 1999 Constitution (as amended)”.

It said the letter requested the DSS DG to “promptly forward all the case files” in respect of Omoyele Sowore to the office of the AGF and Minister of Justice.

Sowore, the publisher of Shara Reporters and former presidential candidate,  has been in custody of the DSS after he was arrested for calling for a revolution in Nigeria.

The service has refused to release him in spite of court order, leading to series of incidents, including the recent invasion of a high court to rearrest Sowore.