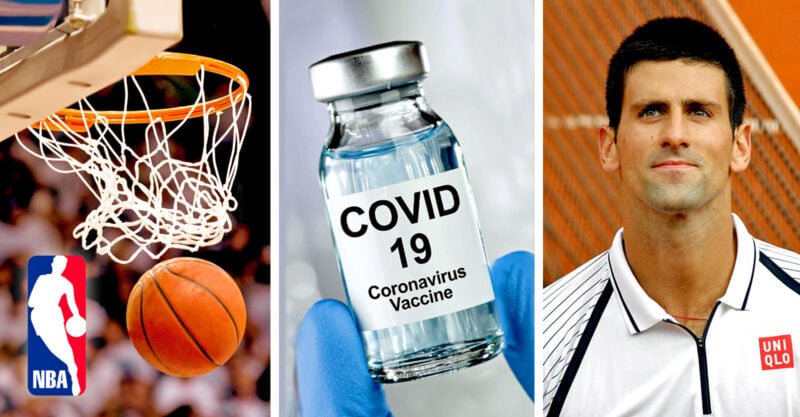 In their complaint, filed Monday in the U.S. District Court for the Southern District of New York, Mark Ayotte, Ken Mauer and Jason Phillips — who have a combined 71 years’ worth of NBA officiating experience — accused the NBA of violating federal civil rights law and New York State and New York City human rights laws.

The lawsuit alleges the “jab or job ultimatum” instituted by the league for the 2021-2022 season — and which was not applicable to players — led to their suspensions for that season.

Then, despite the NBA’s decision to rescind the mandate for the 2022-2023 season, the league fired them.

The plaintiffs are requesting a jury trial, compensatory damages and punitive damages for front and back pay, emotional pain and suffering, reputational damage and attorneys’ fees.

Meanwhile, one prominent athlete who was barred from several high-profile competitions this year due to his unvaccinated status reportedly will be allowed to compete in next year’s edition of one such competition.

Serbian tennis star Novak Djokovic, who previously held the world’s No. 1 ranking, was barred for three years from entering Australia just prior to the 2022 Australian Open because he refused to get the COVID-19 vaccine.

However, Australian authorities this week granted Djokovic a visa so he can compete in the 2023 competition, to be held Jan. 16-29.

“It is welcome news that Australia is allowing in tennis star Novak Djokovic and that referees fired because they are unvaccinated are demanding justice from the NBA.

“Pandemic regulations and policies continue to unravel as their absurdity becomes clear. The glimmer of truth and justice grows brighter by the day.”

In September, Djokovic also missed the U.S. Open in New York City, due to the Biden administration’s continued entry ban for unvaccinated foreigners.

Prior to the U.S. Open, he stated “I’m not vaccinated and I’m not planning to get vaccinated,” while he previously said that missing tournaments was a “price that I’m willing to pay.”

Djokovic has also previously expressed his support for “the freedom to choose what you put in your body.”

According to the complaint filed by the fired NBA referees, the league’s policy held that individuals with “sincere religious beliefs” would be exempted from its vaccine requirement, but “would still have to take precautionary measures,” including adhering to “testing protocols.”

NBA officials instituted the requirement in August 2021, prior to the 2021-2022 season, “through a mixture of collective bargaining agreements” with the National Basketball Referees Association (NBRA), “and administrative fiat.”

As part of this agreement, “the NBA promised to offer medical and religious exemptions for referees,” according to the complaint.

The league’s official policy allowed “those with sincerely held religious objections to the available COVID-19 inoculations” to apply for a religious exemption, ensuring that the mandates were instituted “with little internal resistance” and a “lowered … risk of a legal challenge.”

The NBA granted a religious exemption to “at least one minor league referee” but not the three plaintiffs because, according to the lawsuit, “The NBA’s lawyers, after a pointed interrogation” of the three referees, “adjudged plaintiffs’ beliefs to be illogical, unorthodox, and/or not entirely religious and therefore insufficient to satisfy the ‘high standard’ of a sincerely held religious belief.”

The lawsuit alleges, however, that according to “fundamental hornbook law … an employee’s ‘sincerely held religious belief’ is not held to a ‘high standard’ at all — it is held to an exceedingly low standard requiring only sincerity” and “a belief need not even be religious to merit Title VII protections, so long as it occupies the same métier as a religious conviction.”

Instead, the three referees allege they were subjected to a “hostile interrogation” by league officials and attorneys, in a process that was discriminatory and that “manifested actual hostility toward plaintiffs and toward all others espousing the same particular religious belief.”

According to the complaint, the NBA’s COVID-19 mandate was damaging to the three referees “because of the NBA’s virtual monopoly on plaintiffs’ present and future career opportunities as professional basketball referees,” which left the referees with “not much of a choice,” choosing to “follow their conscience” at the cost of their termination.