About twelve  (12) communities in Boki Local Government Area of Cross River State have been rendered homeless with over 3000 farmlands destroyed by devastating flood following two days heavy downpour.
The incident which occurred between September 18-19 has left properties worth millions of naira and thousands of economic trees destroyed.
The natural disaster which affected bridges that connects some communities to other parts of the local government also polluted the only drinking stream which serves as the source of drinking water in the area.
Boki is found in the Central Senatorial District of the state and its Indigenes  who base there are mostly farmers who deals on cocoa, palm, plantain amongst others.
The affected communities are Bago, Unu, Bagabo, Bakie, Bufua, Kakwe-Beebo and a host of others.
Speaking about the incident, Director General of the State Emergency Management Agency, John Inaku said that the means of livelihood of the affected communities have been seriously affected. 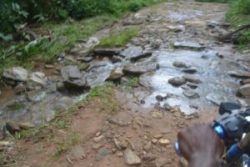 While disclosing that the state government was working hard to address the issue, he said that over 1,000 people were affected and are currently seeking  refuge in nearby communities.
Bukie Obi, a native of one of the affected communities said that the damage may be more serious that initially thought.
Obi appealed to government at various levels as well as international organizations to urgently come to their rescue.
According to him, “The damages may be more severe than we had thought initially because as we speak, more than 500 houses have been destroyed. Thousands of Coca and plantain plantations which form major part of our farms have been destroyed.
“The situation is a very terrible one. I want to appeal to government at all levels to help us.
This should not be left to the state government alone. Even international organizations should please help us.  I’m residing in Calabar but this thing has affected everything about me because I can’t think straight when my people are suffering”.
Photo credit CrossRiverwatch
PV: 0