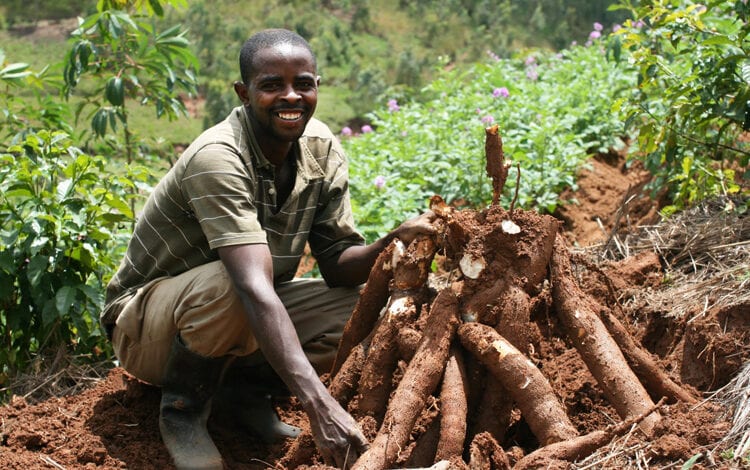 Share this on WhatsApp
Spread the love
A German Non Governmental Organisation, known as GIZ says it is targeting training 650, 000 farmers on four value chains of agriculture to enhance food security in the country.
Dr Folarin Oguntolu, Potatoes Value Chain Advisor, GIAE/GIZ Project, made the disclosure while declaring open a five-day training workshop on Potato Value Chain in Pankshin, Plateau, on Tuesday.
“The essence of Green Innovation Centre Project is to help ensure food security in Nigeria through building farming capacity of 650,000 farmers, creating employment and increasing productivity/income of the rural farmers.
“Out of the targeted 650, 000 farmers, 250, 000 are being physically targeted, while 400,000 are through ICT, across four value chains of potatoes, rice, maize and cassava.
“Our target is the rural farmers, especially women and youths, simply because when their productivity increases, their income will increase and it will impact positively on their lives and communities,” he said.
The advisor said the projects were also aimed at discouraging rural/urban migration, by creating jobs in the rural areas through agricultural activities.
He further said that the overall aim was not only to ensure food security but for the targeted farmers to see agriculture as a serious business.
“When they (rural farmers) produce, there will be food to eat and farmers’ living will also be enhanced through profitability,” he added.
According to him, GIZ had been in Nigeria for a long time and begun with training of farmers in agricultural practices through Farmers Business Schools (now Cooperative Business Schools) since 2015.
“These trainings try to equip farmers with the necessary skills so that they don’t just see farming as a culture but as a business.
“The four value chain of potatoes, rice, maize and cassava are regional specifics.
“It is so in the sense that they are located in areas where they have comparative advantage, with potatoes in Plateau State, rice in Nassarawa/Benue States, maize in Kano/Kaduna States and cassava in Ogun and Oyo States.
“In Plateau, we have already trained about 26,000 farmers on potato production out of the target of 30,000 farmers.
“Those we have trained so far now have their chain projects such as poultry farms, group sales or bulk purchase and sale of agro products.
“With time, they will be swimming or talking in millions of naira,” he said.
Oguntolu expressed hope that by December, when the training of the targeted 30,000 potato farmers would be over, they would have been well equipped with the necessary skills for the success of their cooperatives and chain projects.
He charged the participants to take advantage of the five-day training to acquire the knowledge of producing potatoes in valuable quantity.
Share this on WhatsApp
Related Topics:
Up Next