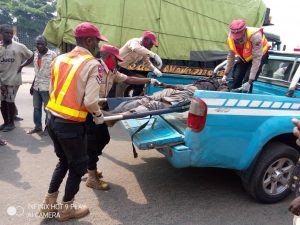 The FRSC, therefore, advised road transport workers on the importance of maintaining traveler manifest at motor parks for easy identification of victims in case of road accidents.

Mr. Idris Yahaya, Deputy Route Commander (DRC) and the Zaria Unit Public Enlightenment Officer of FRSC, said this was known in an interview with the News Agency of Nigeria on Tuesday in Zaria.

Yahaya, who did not disclose the number of unclaimed corpses deposited by the unit at the Ahmadu Bello University Teaching Hospital (ABUTH) morgue, Zaria, however, said the figure was alarming as most of the cases involving commercial vehicles.

He added that the unit was working towards obtaining the approval of the Chairman, Sabon Gari Local Government Council of Kaduna State, to bury the unclaimed dead bodies deposited by the unit at the morgue of ABUTH.

Yahaya also decried the high rate of accidents recorded between Dumbin Rauga to Yan Karfe in the Zaria Local Government Area of the state.

He added that from January to June, Dumbin Rauga and Yan Karfe axis recorded 44 accidents with 83 deaths and 191 serious injuries.

He disclosed that the unit planned to bring key stakeholders together to brainstorm and fashion out sustainable ways of addressing road traffic accidents along the Kaduna-Zaria-Kano highway.

“The enlightenment and strategy conference is to tame the habit of some road users, especially drivers of commercial vehicles turning the completed portion of Kaduna to Kano Expressway into a race course.

“The Sabon Gari Local Government Council has agreed to support the unit on the conference with a view to forestall traffic crashes in the area,” he said.

However, in a separate interview with NAN, Prof. Ahmad Bello, the Chairman of, the Medical Advisory Committee, ABUTH, said he was not aware of the unclaimed corpses of accident victims at the hospital.

Bello added that if there was any complaint from anybody such complaint was yet to reach his table.