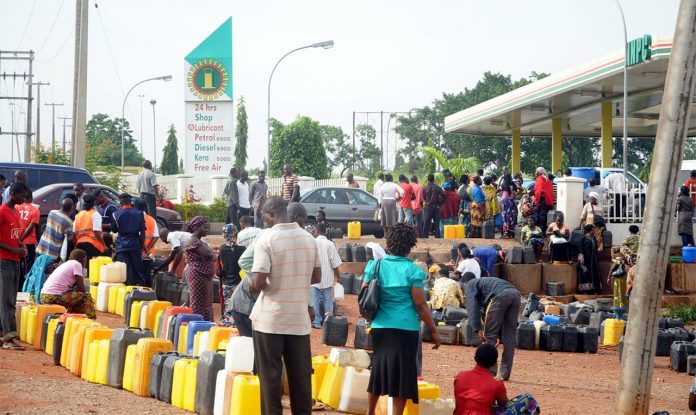 There seems to be some level of anxiety and confusion in Lagos as the fuel scarcity appears to have hit some parts of the state, as queues were sited at filling stations across some areas

While several filling stations were shut, there were unusually long queues of vehicles at a few filling stations in Berger, Alausa, Ojodu, Ikoyi, Obalende and Victoria Island on Sunday evening and Monday morning trying to buy Premium Motor Spirit, otherwise known as petrol.

The scarcity, according to our findings, is caused by increased demand for the product due to fears that the Federal Government may remove fuel subsidies soon.

The long queues at the filling stations which have been causing traffic in those locations seem to have persisted on Monday morning.

The Manager of one of the Enyo filling stations on the Lagos-Ibadan expressway, who preferred anonymity, explained that his management decided to sell only N3,000 worth of fuel to each motorist on Sunday afternoon in order to manage the little fuel they have.

On why the station took such a decision, he said, “We were informed to do that because nobody knows the decision the Federal Government may take this week or soon. There is a tendency that the price may go up this week.

“The tanker drivers are also not finding it easy to buy diesel, whose price has skyrocketed too. Diesel is too expensive and at the same time scarce. If they don’t get diesel, how will they supply us with fuel?”

A fuel attendant at an Oando filling station, disclosed that the directive to shut the station was given by its manager on Sunday afternoon.

He said, “The manager asked us to shut the station not because there is no fuel but because the price of fuel may go up this week due to the scarcity of the product.”

Mr Okoronkwo said the ongoing conflict between Russia and Ukraine had disrupted the smooth distribution of petrol. He noted that marketers and transporters are now finding it difficult to bridge products to other parts of the country from the depots because of running costs.

The huge amount spent in running the diesel trucks to transport fuel is very discouraging because we are running at a loss.

“The current N165 per litre pump price for PMS cannot fit into the present realities without the pricing template being reviewed.

“We appeal to the government to look into the situation by either reviewing the freight rate or providing palliatives to all marketers to restore normalcy to distribution.

“The palliative can be making diesel accessible for marketers at discounted rates so that we can easily transport products across the country,” Okoronkwo said.