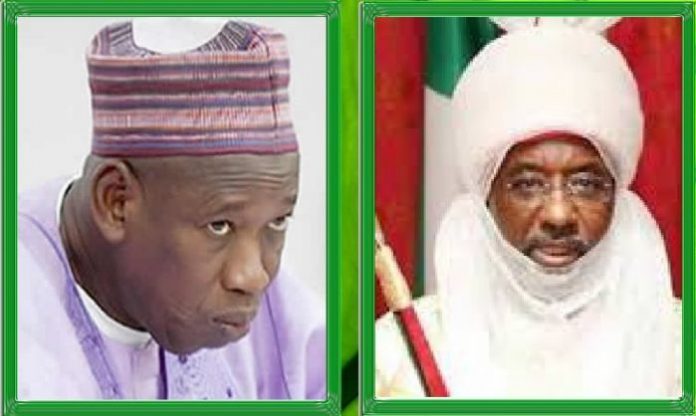 The frosty relationship between Governor Abdullahi Umar Ganduje, and the Emir of Kano, Muhammadu Sanusi, has the potential of jeopardizing efforts to attract new investment to the state, investment experts have warned.

The Governor who is expected to assume a new four-year mandate has identified investment mobilization as one of the key economic agenda of his new administration.

One of the major achievements recorded in the out-going tenure, which expires next week, is the establishment of Kano State Investment Promotion Commission (KIPC), under the chairmanship of the embattled traditional ruler.

As a way of realizing the core objective of the commission, which is to boost the state share of local and foreign investment, Ganduje and Sanusi have jointly and individually crisscrossed several countries selling the numerous investment opportunities available in the state.

The governor recently participated in the 8th Annual Investment Meeting (AIM) in Dubai, United Arab Emirate (UAE), where he made a lead presentation geared at marketing investment opportunities in Kano to investors from the country, and other Middle East countries.

Investment experts are of the view that the on-going face-off between the two leaders is going to serve as a huge distraction to the quest by the state to attract new investment.

The sources who have full knowledge of the crisis between the governor and the emir believe on-going investigation of the emirate’s accounts by the Kano State Anti-Corruption Agency over alleged embezzlement of the Emirate Council fund by the emir, is a plot aimed at achieving the objective of getting him dethroned.

There are fears that the anti-corruption agency is going to declare a guilty verdict against the emir, which will give way for the governor to move for his dethronement or ask for him to resign.

Investment experts view this move as grave to the bid by Kano State to attract new investments, as well as put on hold some of the new investment plans, which many foreign investors have on the table for the state.