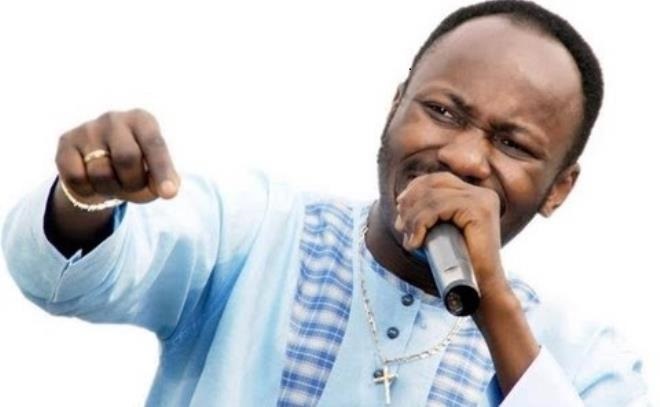 Johnson Suleman, founder of Omega Fire Ministry, may have done more harm than good by seeing to the release of seven prisoners, including three rapists, from Auchi Prison, Edo state.

They were all given the option of fine.

However, their story changed after attending a service at the headquarters of Suleman’s church in Auchi on July 23.

Addressing them at his church auditorium after they had been freed, Suleman warned them not to go back to crime.

He also promised to empower them and told the congregation that he spent N1.5 million in the process of securing their release.

“There are seven people from the prison here who were convicted. They have been sentenced but we needed to intervene. They needed a bail bond. Put that together, everything is running to N1.5m thereabouts,” Suleman said.

Turning to the men, he said: “It is important that we get you out… We are not getting you out so that you go back to crime because God does not give third chance, He may give second chance.”

An unidentified prison official also spoke at the service thanked the pastor for securing the release of the ex-convicts.

He also appreciated the role Suleman had been extending to the facility.

“I want to say a very big thank you to Professor Apostle Suleman and his beloved wife for setting these people free. It is not an easy thing. Many have been coming to preach but we are happy with you,” the official said.

“We know what you have been doing for the prison and today, these people are set free by God through you. So we appreciate you sir.”

However, Priscilla Usiobaifo, executive director of BraveHeart Initiative, a non-governmental organisation in Edo, said the release of those convicted of rape was having a negative effect on their victims and their families.

Usiobafio said her agency monitored the case from the beginning and followed through till the accused were sentenced to prison.

She said it was painful that after securing justice, the man who raped a minor spent only two months in prison, while the gang rape convicts spent four months.

Usiobafio said the mother of one of the ex-convicts went to the house of three-year-old victim to harass the mother of the minor who was assaulted.

Together with her brother, the woman was said to have mocked the victim’s mother that Suleman had secured the release of her son.

She added that the little girl went into a coma when she sighted the man who defiled her.

“The mother of this three-year-old baby called me that when her daughter sighted the young man and her child went into coma and later in the evening she called back to report that that the mother of the rapist came to her house, in fact knocked on the door to her room and began to make mockery of her telling her that the son which she sent to the prison has been released by the man of God,”.

“I wrote a report on it and put it on social media- Facebook, WhatsApp – the next day and there was an outrage on the social media. A lot of people contacted the pastor and informed him of what was happening and by Friday last week, he reached out to me.

“I narrated everything that happened to him and he apologised that he didn’t know the crimes committed by those people. He didn’t know that that was their background.

“He also stated that he was willing to do whatever he can as damage control to the victim’s family and call the rapist’s family that he didn’t send them back home to further victimise the victim.”

Aminu Suleiman, spokesman for the Edo command of the Nigerian prison service (NPS), told TheCable that he was not in the know of the release of the prisoners.

“I don’t have a report of that information on my hand at the moment. I will find out and get back to you,” he told TheCable.

Usiobafio said her agency was exploring some options in order to make sure that the victims do not suffer in vain.

She also spoke on the need to implement child rights law, saying if that had been done, the ex-convicts would not have walked out free because the law stipulates life sentence for rape.

“One of the options we are considering is to appeal the three cases. We can’t send them back to the prison because their fines have been paid,” she said.

“So, we should have a case where the police themselves send the case to the high court.

“Number three is to ensure the implementation of the child rights law act. Each state has the child right law and it is very clear. Defilement is life imprisonment. We have a child right law, they should be using it, why are they still using the criminal law?

“If there was no fine, apostle wouldn’t have even released them, and the truth is that if apostle had not gone there, they could still have been released. Imagine if a farmer brought say N150,000, on the day they were sentenced, one of them could have gone home. That is the other angle of this issue.”