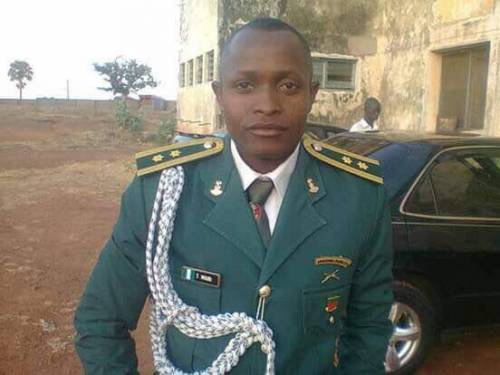 The Army Staff Sergeant who committed suicide after killing a captain and three of his colleagues, Silas Ninyo, in Chibok, Bornu State committed the act in a fit of jealousy over a girlfriend, National Daily has gathered.

National Daily gathered that the late Sergeant was in a relationship with a lady simply identified as Esther who runs a canteen at the market square. Silas, it was gathered became jealous over the way men went to partner’s restaurant.

According to a witness who narrowly escaped being shot by Silas on Sunday, the late Army Sergeant was having a serious fight with Esther when the late Captain Tanko Mani was notified, and he promptly intervened. A move that angered Silas.

Captain Tanko Mani, who wasn’t far from the scene, called for him and asked why he was fighting with civilians. In an attempt to calm him, the captain told him to get in his own vehicle so that they return to the camp together, but he refused. He said he walked here himself and he will walk back to the camp and the captain can go.

The captain, however, insisted that the soldier join him, and other soldiers at the scene began shouting at him to respect the standing order from a superior.

Ninyo, who was reportedly drunk, had moved about 200m when the captain beckoned some patrolling soldiers to join him in ensuring they return to the camp with the erring soldier.

The witness said that they all started running, with the captain who had already been hit, but the solider continued shooting at the captain until he fell and died.

“The captain and I were running to take shield inside my shop, and he kept after the captain till he was down,” the witness narrated.

“He was just too jealous because a lot of men, after the day’s work at the site, do come to relax at Esther’s restaurant. And, in all that I know, Esther is not dating any of these men. I escaped, his bullet almost hit me, too. When he saw that the Captain was dead, he shot himself dead, too.”