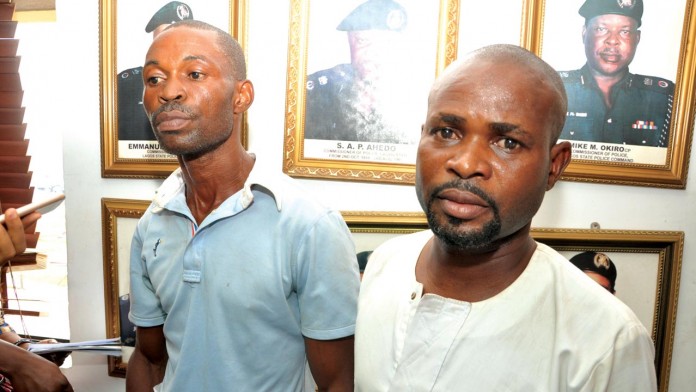 A kidnapper arrested for abducting two children, six and four years old at Igando area of Lagos on Thursday told news men that he lured the children with biscuit.

The suspect who is an apprentice at a barbing salon within the area said that he was called by one mama Chioma popularly known as Chairlady to get her two children.

He added that the woman had gotten his number through his girlfriend and promised to reward him for the children.

“I told the children that I will buy them biscuit after which they followed me to where I delivered them to the woman at Akesan bus stop, Igando.

“I went with the woman and the children to a prophet who asked me to bring N6, 000 for a charm that will enable me bring them more children without being caught.” he said.

The children’s mother, one Monsurat Badmus, who hawks maize however told news men that he was expecting his children to be back from lesson before going to hawk.

“When I did not see my children, I ran to their school and was told they had left but one of the kids around later told me that my children were seen with one Uche, a barber.

“I quickly went to report at the police station and the policemen went on the trail of Uche at the barbing salon.

“Uche was not at the salon and his phone number was not reachable but his boss was at the salon.

“Uche’s boss was told to produce him or risk being arrested but Uche was later apprehended on his way back and taken to the police station where he first denied but confessed and the other prophet, his accomplice, was arrested.” she said.

The Lagos State Commissioner of Police, Mr Fatai Owoseni, while parading the suspects however said that two of the suspects had been arrested while police is on the trail of the woman, who is the receiver.

He said that woman is being hunted to find out if she still has any victim in her custody.

Owoseni further advised parents and guardians not to neglect their responsibilities in the name of sourcing for means of livelihood.