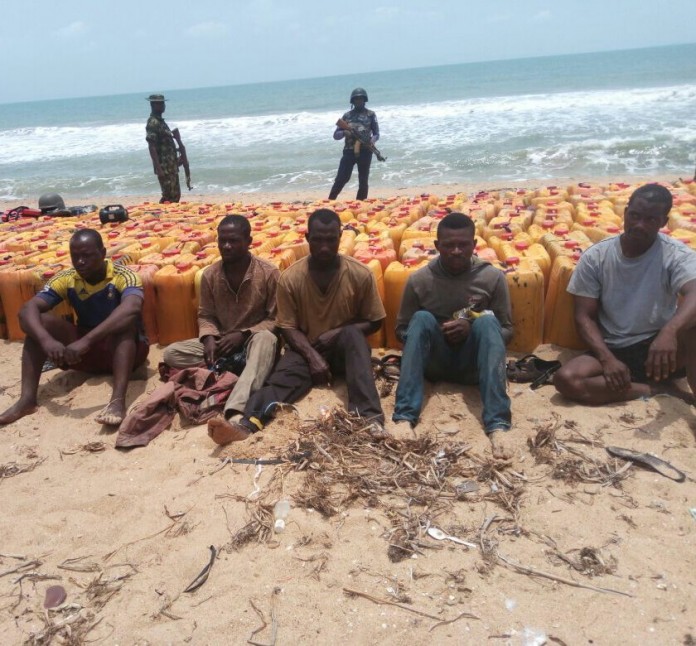 Five suspected pipeline vandals have been handed over to the Nigerian Security and Civil Defence Corps, (NSCDC) for prosecution.

In addition, 680 jerry cans filled with petroleum products were also handed over by the Commander, Forward Operation Base, Badagry, Capt. Olusina Ojebode.

National Daily learnt that the suspects were arrested at the Dadi Village in Badagry, Lagos State following a tip-off.

According to the Commander, ‘The vandals were arrested on March 20 along Badagry waterways for illegally dealing in petroleum products suspected to have been scooped from vandalised pipeline.

“Our men swung into action on a tip off and we deployed our patrol boats and they were intercepted.”

He reiterated that having seen the number of petroleum products they had, we interrogated them and found out that they were on illegal venture.

Moreover, Captain Ojebode further explained that the suspects could not provide any useful information on how they got the products. They only said they were taking it across the border to Benin Republic.

“We started the operation around 11 am and we finished it around 8am the next day. During the interrogation, they said they were bringing the product from a village in Atlas Cove,” he said.

Nigerian Navy is saddled with the responsibility of protecting the maritime domain including areas of pipeline protection and vandalism.

On behalf of NSCDC Area Commander, Lagos West, Ajiboye Musa, said the suspects would be charged to court after due investigation.

He, however, warned people to desist from perpetrating such illegally.