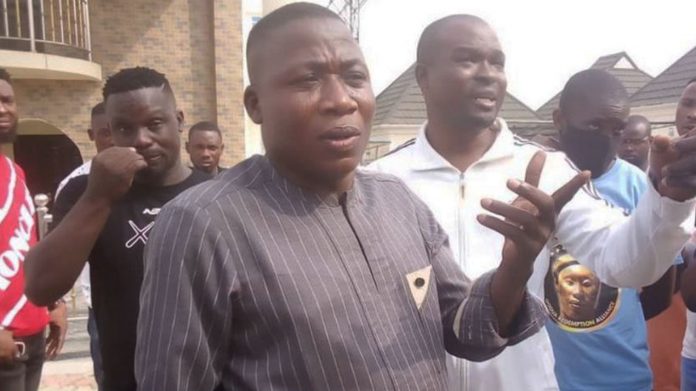 As Ilana Omo Oodua militant leder Sundy Igboho walked into a trap in Benin, and is expected to be shipped back to Nigeria where he’ now a wanted man, his group are hoping a fellow state in ECOWAS will not hand over the fugitive to Nigeria.

The leader of the separatist group, Professor Banji Akintoye, expressed the hope, and said he is working to ensure Adeyemo, aka Igboho, is not repatriated.

How a private citizen and non-state actor can prevail over a sovereign state in matters of international agreement is in question, though.

IPOB leader Nnamdi Kanu was hauled in from Kenya in a similar fashion weeks ago, after three years of jumping bail during his terrorism trial in 2017

In a statement confirming the arrest, Akintoye called on all Yoruba people “within and beyond the shores of Nigeria to come out and ensure that their ancestral land is not defeated by invaders.”

“Fortunately, Benin Republic is reliably a land of law where the authorities responsibly obey the law. We have secured the services of a leading and highly respected lawyer whom we can confidently rely on,’ he said in the statement issued July 20.

“What the situation now calls for is that the Yoruba nation at home and in the diaspora must stand strong, resolved that neither Sunday Igboho nor any other Yoruba person will henceforth be subjected to inhuman or dehumanizing treatment of any kind.

“We Yoruba nation are, by the grace of God, a very strong nation. We must arise now to show that strength.”

The governors of the southwest that control the so-called Yoruba nation have distanced themselves from Igboho’s agitation. Many of the region’s first-class obas have showed no support either.

In its warning following the invasion of Igboho’s house where weapons retreived were said to have been stockpiled by the agitators, the DSS urged Igboho to turn himself in–and that his advisers should advise to heed the warning.

Akintoye stated that Igboho has committed no crime, and must get his freedom back so as to be able to move and operate as a free person.

“We know that some people are trying to suppress or even eliminate him only because he stood up to defend his kinsmen, women and children who are being massively killed and raped in their ancestral homeland; who are having their assets and means of livelihood destroyed, and who are facing ethnic cleansing and even genocide without having the benefit of protection by the rulers of their country,” he said.

“We know, furthermore, that for the protection of his people who are being brutalized, he has joined hands with many of his brethren to take the legally appropriate step, namely to seek the intervention of the International Criminal Court,” Akintoye said.