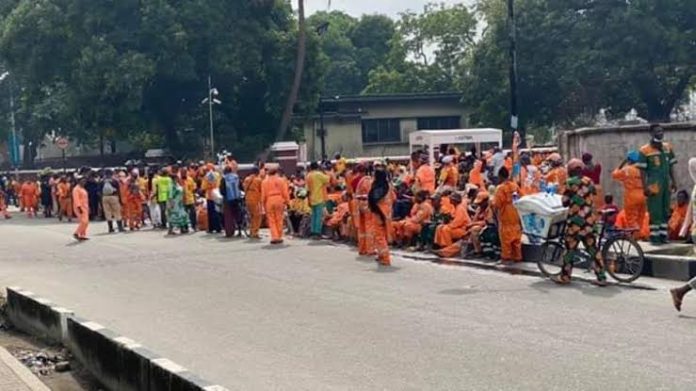 The Lagos State House of Assembly has urged Governor Babajide Sanwo-Olu to initiate a probe of those behind a viral video, where some sweepers working the with Lagos State Waste Management Authority (LAWMA) were protesting  the non-payment of their salaries.
This was contained in the Lagos State House of Assembly Motion Number 22 moved by Hon. Desmond Elliot (Surulere Constituency 1) along with other lawmakers during plenary on Monday 6th July.
The  Motion was entitled; “Need to Enhance Waste Management In Lagos State.”
Hon. Desmond Elliot stated that the House resolved to commend the efforts of the Lagos State government on waste management in the state.
Elliot stressed that the House condemned those behind the videos that went viral on the issue of non-payment of the salaries of sweepers by LAWMA and that the House called on the Governor and the Ministry of the Environment to unravel and bring to book those behind the video meant to embarrass the state.
The House then called on Governor Babajide Olusola Sanwo-Olu of the state to direct the Commissioner, Ministry of Finance, Accountant General, State Treasury Office, the Commissioner, Ministry of the Environment and Water Resources, the Acting Managing Director, Lagos State Waste Management Authority and other relevant Agencies to expedite action on the payment of all outstanding allowances of the sweepers.
“Governor Sanwo-Olu should direct the Commissioner, Ministry of Information and Strategy in conjunction with the relevant agencies to sensitize members of the public on the need to dispose their refuse properly and the importance of having waste bin in their respective houses; and mandate the Committee on the Environment to investigate the immediate and remote causes of these irregularities in LAWMA with a view to finding a lasting solution to the matter,” he said.
While stating that the House was mindful of the modern technology means deployed by the state government to ensure a cleaner Lagos, he said that the Governor should mandate the Committee on the Environment to investigate the activities of LAWMA to make their job more effective.
Elliot added that everything was going smoothly before COVID-19, and that with COVID-19, the state suffered a lot over IGRs.
In his comment, the Speaker of the House, Rt. Hon. Mudashiru Obasa stated that there was need to address the issues raised by the staff of LAWMA.
Obasa stated sweepers were employed to sweep Lagos State roads based on humanitarian gesture of the state government, which he said had the alternative of using mechanised ways of removing wastes in the state.
“The state can come up with mechanised ways of removing wastes. We also want to reduce crime, which was why we are doing the job manually.
“We should condemn those behind the video because there are many channels available for them to make their grievances known. The issue started during the break out of COVID-19 and everybody was affected. Those behind the video should be brought to book. We should condemn those going to the media to embarrass the government.
“For those who played roles in the delay of the salaries of the sweepers, the committee could see how they could be held responsible,” he said.
In his contribution, Hon. Rotimi Olowo (Shomolu 1) said that policing the canals and primary drainages in the state required more attention, and that the motion should be supported.
Hon. Kehinde Joseph (Alimosho 2), in his comment, said that the matter should be investigated, but that the government should not stop the salaries of the sweepers in the process.
Also Speaking, Hon. Ajani Owolabi (Lagos Mainland 1) said that Coronavirus pandemic restricted the efforts of the state government to deal with some issues.
Ajani said that plastic waste poses the greatest challenge in the state and majorly responsible for drain blockages,while he urged the state to take drastic step in converting this particular waste to wealth and thereby create jobs.
“The roads are usually being flooded. We can monetise the plastic waste, and we can call on the Governor to look at this in a way that we can monetise plastic wastes and also create jobs,” he said.
Also contributing, Hon. Gbolahan Yishawu (Eti Osa 2) said that the viral video could not be ignored.
Yishawu then supported the resolve that the money of the staff should be paid.
He added that the sweepers were front line officials that worked during the lockdown, and that the matter should be investigated as suggested in the third leg of the resolve.
Some other lawmakers, who contributed to the motion included Hon. Jude Idimogu (Oshodi/Isolo 2), Hon. Olayiwola Sobur (Mushin 2), Hon. Temitope Adewale (Ifako/Ijaiye 1), Hon. Saka Solaja (Ikorodu 2) and Hon. Adedamola Kasunmu (Ikeja 1).