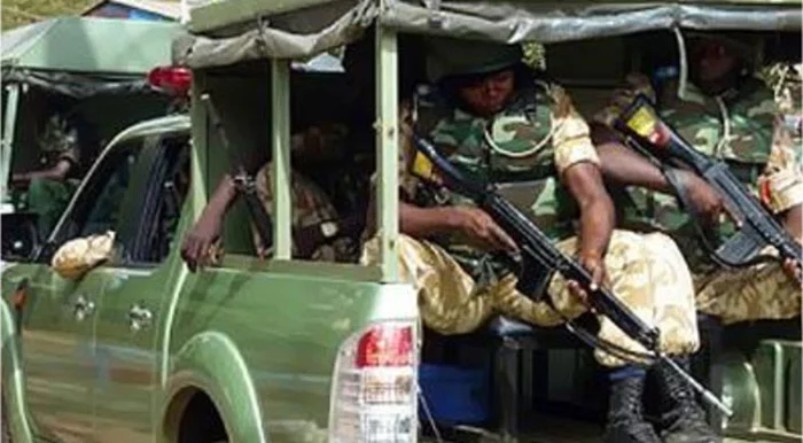 The Joint Task Force (JTF) in the Niger Delta, Operation Delta Safe says allegations that it invaded Igbomotoru community in Bayelsa is baseless and an attempt to distract ongoing efforts to stamp out oil theft.

The News Agency of Nigeria reports that the joint military force conducted a site visit to the illegal refineries site on Thursday with newsmen, led by Lt. Col. Philimone Malgwi, the Commanding Officer 343 Artillery Regiment.

The trip showed the illegal refining sites operated by oil thieves, where the ongoing clampdown on criminal elements took place, are located about 1.3 to 5 km away from Igbomotoru community.

Addressing newsmen after the visit, Rear Adm. Aminu Hassan, the JTF Commander, said the mandate was to protect oil and gas infrastructure and deter militancy, sea robbery, crude oil theft and other form of criminality within the Niger Delta region.

He dismissed claims that the JTF was occupying the area and maintained that the operation was in line with their rules of engagement.

He added that the military was in the area to flush out criminals and protect law-abiding residents from criminals.

“In the way we do our things, we believe in showing people that we have nothing to hide, that is why we conducted the press to the field and we showed them what and what is there, and what the criminals are doing.

“They have erected illegal refining camps the size of which had never been seen in Bayelsa before. We have been watching them before now, it is now they want to start operation and we must stop them.

“We are here to protect the people, the oil and gas facilities, we follow international best practices, as professionals,” he said.

He challenged the suspected masterminds of the illegality behind the false alarm, to come out to answer them if they believed they had no hands in the illegality going on in the Igbomotoru, and its environment.

The JTF Commander urged the people of Igbomotoru to work together with the JTF to protect the national assets which belonged to all Nigerians.

Hassan explained that the JTF did not engage in dehumanising practices and did not interfere in community affairs.

He said the JTF had no links with allegations of rights abuse against a surveillance contractor, Dalon Security Services engaged by Agip in the neighbourhood.

According to him, the terrain is a difficult one that the JTF is ready to take anyone ready to the illegal refining site which is the biggest in Bayelsa, so far.

He called on young people to go into legitimate business, and shun illegalities which would not pay them well but cut their lives short.

In his remarks, the Commanding Officer said they deployed their men in the area because the oil thieves and illegal refineries opetators had been unleashing terror to law-abiding residents of the area.

He said investigations indicated that the illegal refining sites were all tied to one suspect who had been attacking people opposed to using the area for the illicit acts, adding that the JTF was already on his trail.

Share this on WhatsApp
Related Topics:BayelsachasingdeniesinvasionJTFoil thieves
Up Next