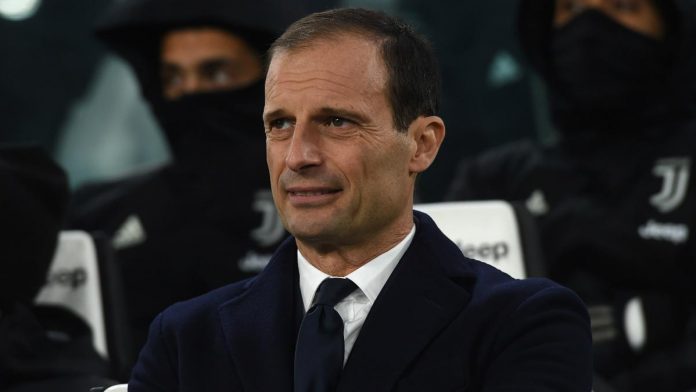 Max Allegri confirmed he is staying at Juventus, discussed his reaction to criticism and Champions League performances. “Football is a stupid sport for intelligent people.”
The tactician sat down with comedian Fabio Fazio and his Rai programme ‘Che Tempo Che Fa’ and immediately commented on Saturday’s ugly live television row with Sky Sport Italia pundit Lele Adani.
“I am calm today, I got a bit cross yesterday. You know, every time you hear this lecture on what you did wrong and ought not to be doing, it can wind you up and I am only human. I don’t go around telling you how to do your job!
“I accept constructive criticism, because it is part of the game, but after two or three times the same… I can give you my opinion, which may well be that you don’t understand what you’re talking about, but it’s still an opinion.”
While Juventus won their eighth consecutive Scudetto – the fifth under Allegri’s tenure – they crashed out of the Coppa Italia and then the Champions League.
“Winning five rounds early meant we were in a holiday mood sooner than we should’ve been, because the Champions League was hard to swallow. But sport is wonderful because you must know how to celebrate victories and accept defeats. You can’t win all the time.
“It is a difficult competition, there are teams who took many years before managing to win. Some point out Juve haven’t won the Champions League for 23 years and that is true, but over the last five years our level has grown considerably.”
Allegri reiterated that he has no intention of walking away from Turin and that the feeling with the club is mutual.
“I’ve already said I’m staying, so I’ll say it again: I am staying at Juventus! I still have another year on my contract, then I’ll meet up with the President.”

There were some other details in the interview, such as Allegri confessing he’s still not quite sure how to spell Wojciech Szczesny, while it’s Juan Cuadrado who always puts foam in his hair during Scudetto celebrations.
“I’ve been a player and I’ve made every mistake. I always tell the lads, whatever it is you’re thinking of doing, I’ve already done it. That’s what experience is for and the rapport I have with them means I can give some advice.
“It’s also important to still play pranks and have fun, because I can’t be myself if I’m not having fun. There’s tension during games, you target objectives and now football is big business, as Juventus have a revenue of €550m per year, so the results mean a lot.
“I don’t really like all these tactical systems people talk about, 3-5-2, 4-3-3 and all that. I’ve learned that football is a stupid sport for intelligent people, because the simplest things are truly also the most difficult to get right.
“For example, you can say a player made a simple sideways pass, but it’s not simple, it’s football. The lower you go down the levels, the more players think they need to hang on to the ball to prove how talented they are, but that’s not football.”