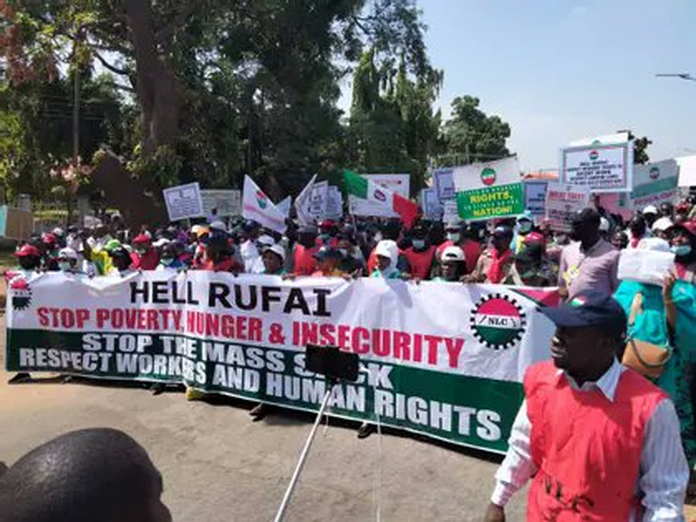 Kaduna State Gov Nasir El-Rufai governor is out for blood in the clash between him and the Nigeria Labour Congress, and the cannon fodder appear to be civil servants.

Apparently, the state workers drew the first blood when NLC President Ayuba Wabba led them to ground the state on day one of the five-day warning strike.

Enraged El-Rufai has since taken series of drastic action to hammer down the insubordinate proletariat.

The National Daily earlier reported how he first placed a bounty on Wabba, and later Tuesday issued an arrest warrant, for leading a protest that sabotage the economy and security of the state.

“Ayuba Wabba & others of @NLCHeadquarters declared wanted for economic sabotage & attacks on public infrastructure under Miscellaneous Offences Act. Anyone that knows where he is hiding should send a message to @MOJKaduna KDSG. There will be a handsome reward!” he tweeted.

All the nurses below grade level 14 in the state were the first casualties—for their solidarity with the Nigeria Labour Congress.

In a follow-up to that, the governor fired all the Kadua University lecturers—those who joined the strike.

And he has a word for those who refuse to resume work.

“Any academic staff of KASU that does not report for work will be dismissed,” he said in a press statement by his aide Muyiwa Adekeye.

“The authorities of KASU are to submit a copy of the attendance register for all categories of staff daily to the Secretary to the State Government and the commissioner of education.”

The workers are protesting the sustained downsizing policy of the administration, alleging no fewer than 70,000 workers have been laid off since the governor took office.