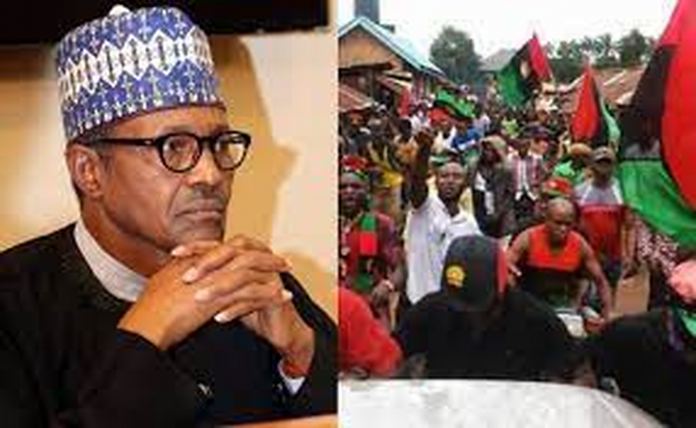 Less than 24 hours to President Muhammadu Buhari’s visit to Imo—a visit against which IPOB already issued a sit-at-home order—there are indications the secessionist group has pedaled down, again.

This is the third time the group will be walking back its sit-at-home order which citizens now observe as a rite in the southeast.

IPOB Director of Socials, Chika Edoziem, declared September 7 the order was to protest against Buhari.

“Nigeria’s president is not welcome in Imo State, Biafra Land on Thursday, September 9, 2021,” he said.

“All the traditional rulers, all ndi iche and every Biafran should stay away from any ceremony organised by Hope Uzodimma to welcome him.”

Now that order is rescinded.

A fresh statement the group released has not just denied issuing such order, it has also called for security and safety of Biafraland by members.

And Chika Edoziem himself denied everything he reportedly said earlier.

“We have been inundated with calls and messages from Umu Biafra and other well-wishers over a viral message purporting our directive for a -at-home order across Biafra land in reaction to the planned visit of President Muhammadu Buhari to our Biafran land,” he said.

“The Directorate of State hereby dissociate itself from the propaganda been peddled by the enemies of Biafra. At no point did the directorate issue such circular to Umu Biafra. And we would not encourage anyone who wishes to put the lives of Ndi Biafra on the line by constituting authority upon themselves.”

According to him, the only sit-at-home order in Biafra land “remains that which will happen any day our leader Mazi Nnamdi Kanu has ordered and approved by the Directorate of State”.

And if IPOB obeys his instruction, the directive to keep peace might have come from above, too.

He then informed the group and its militant wing ESN to do something complementary.

“By this notice, all Biafra security formations across Biafra Land are directed to ensure the safety of our people as they go about their daily business activities and other engagements tomorrow.”

The back and forth now rampant in IPOB has convinced many the federal government is breaking in IPOB leader Nnamdi Kanu—or some horse-trading is going on.

Kanu has been dumped back in DSS detention after he was caught in Kenya and transported to Nigeria in July, three years after he jumped bail during his 2017 treason trial.