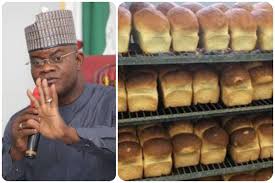 The Kogi State Government has issued an official query to the Permanent Secretary, Ministry of Commerce and Industry, Usman A. Ibrahim, for official misconduct over the recent widely spread report of bread levy allegedly introduced by the state government.

In a letter signed by the Head of Service, Kogi State Government, Mrs. Deborah Ogunmola, the affected official was directed to respond within 24 hours to exculpate himself on why disciplinary action should not be taken for gross misconduct.

The HOS stated that the concerned official on November 9, 2020, signed a letter addressed to the Chairman, Association of Master Bakers and Caterers of Nigeria (AMBCN) Kogi State branch, on the subject of introducing an identified consulting company and levies on bread to all bakers and caterers doing business In and across the state.

Mrs. Ogunmola added that investigation revealed that the official acted without obtaining the approval of the Commissioner in charge of the ministry and could not provide any file documenting the approval for the dissemination of such information.

The HOS stipulated that despite the official’s denial, his actions contravened the provisions of Public Service Rules, Section 4 – 030402 (1), (N) and (o) which might lead to his dismissal from the service.