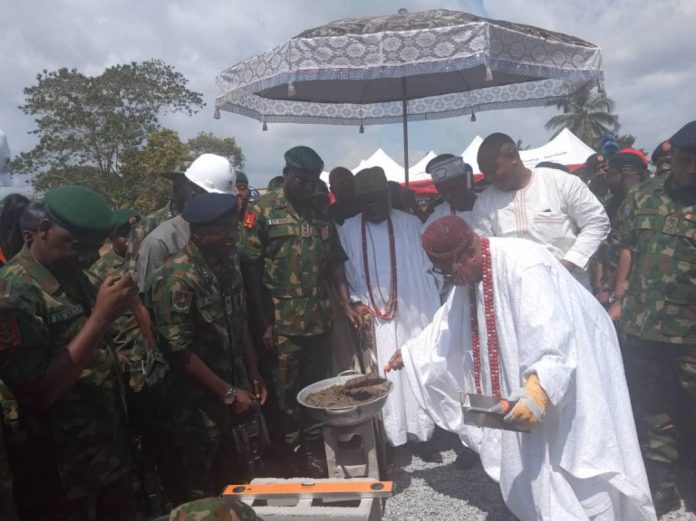 The Governor of Lagos State, Babajide Sanwo-Olu has pledged to to support the Nigerian Army as it relocates three units to an old barracks in Epe.
The Chairman of Epe Local Government Area, Mr Doyin Adesanya, who represented the state Governor at the Grand breaking ceremony for the construction  of buildings and infrastructures for Nigerian  Army units affected by Lagos-Ibadan railway modernisation project said the state would contribute its quota.
“We would give you maximum support by contributing our quota. We have been expecting you and now that you are here, we shall support you maximally. We would also use this opportunity to ask for your support in the area of robust security in our town.
The Chief of Army Staff, (COAS) Lt Gen Tukur Buratai explained at the ceremony that “the new drive to modernise the transport sector led to the relocation of those units originally domiciled in Yaba.
While appreciating the Minister of Transport, Hon Rotimi Amaechi, added that his swift appropriation of funds to effect the relocation would also impact positively on the security in Epe.
He reiterated that the Nigerian Army would continue to be professional and responsive to defending its constitutional roles. With Exercise Crocodile Smile IV ongoing, we shall tame the activities of miscreants, street urchins, kidnappers and other criminal elements.
The units relocated are 81 Division Base Ordinance Depot; Nigerian Army Printing Press and 81 Division Tailoring Factory.
The honourable Minister of Transportation, Rotimi Amaechi, who was represented by Barry Odii, a Deputy Director, Railway Transportation Services, explained that the Nigerian Army’s candid and prompt response to their demands to relocate the units was a mark of professionalism considering that they gave prompt response to their request.
The Corps Commander, Nigerian Army Engineers, Maj Gen Samuel Malu cautioned encrochers of the 440 hectres of army land to stay away. “Individuals encroached into the undeveloped portion. To avoid further encroachment, the COAS demanded it’s development.”
It was gathered that the scope of work include office complexes; officer’s quarters, Senior non-commissioned officers’ quarters, Officers Mess; Corporal below quarters; Wartant Officers and Sergeant mess; soldier’s club; worship centres and perimeter fence.
PV: 0