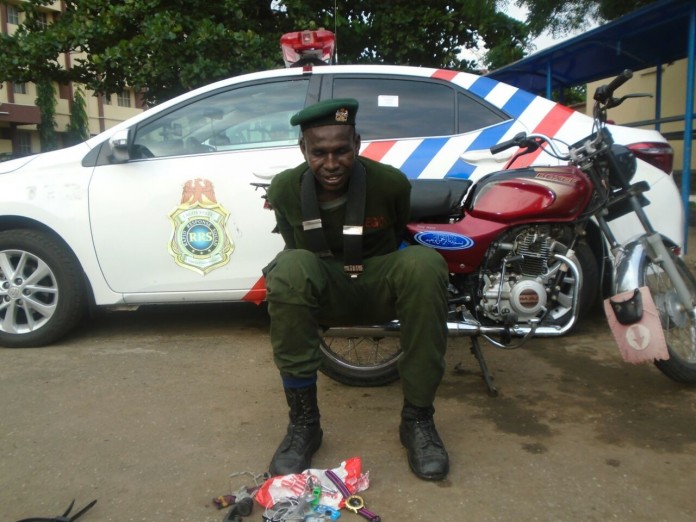 A man identified as Umam Hamid, an official of the Nigerian Legion has been arrested for impersonation and stealing of motorcycles in Agege, a Lagos suburb.

The suspect was nabbed by operatives of the Rapid Response Squad (RRS) of the  Lagos State Police Command for posing as a member of the Lagos State Taskforce on Special Offences to rob motorcycle riders  popularly called “okada” in Agege and its environs.

Hamid, 48, from Borno, a Second Lieutenant of Nigerian Legion, Lagos State Command, was arrested on Friday evening at about 10:30 p.m. by RRS operatives in Agege after dispossessing one Amin Al–Hassan of his motorcycle.

He was said to be working with his accomplice, Tijani Bashir, now at large. They were said to have accosted his victim, Al–Hassan, at Total Filling Station, Agege and told him that he was a policeman attached to the Lagos State Taskforce on Special Offences.

He told his victim that he was impounding his motorcycle for plying restricted area and for operating at prohibited hour.

The victim, Al–Hassan, began to plead for negotiation but Hamid demanded for N20, 000 but the victim could only produce N5,000:00, which the suspect rejected.

“When he refused to accept the N5,000:00, he mounted the bike and rode it towards Iyana Ipaja. I begged him but he told me to get down from the bike because I sat behind him while his partner rode the bike they brought”, Al–Hassan explained.

He continue:  “he rode through Agbotikuyo, Agege.  At  Mulero, I forced the bike to a stop by removing its key from the ignition, and I got down. “

” We were arguing when two passers-by joined us and they requested for his identity card when he told them that he was a policeman with the Lagos State Taskforce” the victim added.

He was reluctant but later flashed his ID card before them but one of them was so swift to snatch it from him. Then, he began to chase the guy, who quickly ran towards RRS patrol team nearby who arrested him and collected the dagger he was holding”.

At the RRS’s Headquarters, three other victims from whom Hamid had collected bikes weeks before he was caught on Wednesday, came with particulars of their bikes, alleging that Hamid, along with an accomplice, whom they described took their bikes.

The victims, Shuaib, Abdullahi, Umaru Hassan and Salisu Umaru, stated that the suspect collected their motor cycles in a spate of three weeks, and one of his victims was shot at a close range in the cheek at Shoretire Street, Agege.

One of the victims, Shuaib Abdullahi explained that the suspect at around 9:00 p.m. on Wednesday last week, took his bike, FKJ 259 QA, Boxer model, from him, under the pretext that he was taking him to Taskforce Office.

“He drove me to Ile–Zik before threatening me to get down or he would kill him at the deserted place. I requested for his number and he gave me a fake number. I called the number immediately he left but the number didn’t go”.

I learnt he was arrested yesterday, that was why we came to RRS to collect our okada from him”, he said.

The suspect, however, failed to deny the allegations of the three other victims when they confronted him.

Confirming the arrest, the Police PPRO, Superintendent Dolapo Badmos said his arrest would led to the arrest  of others and check the spate of motor cycles theft in Agege and its environs

The suspect has been transferred to Special Anti-Robbery Squad (SARS) for further investigations.