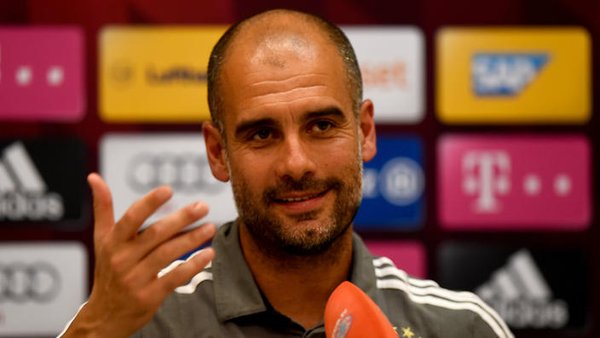 Pep Guardiola says he is “like a woman” and will be able to juggle his current role at Bayern with preparations for life at Munich Manchester City from the summer.

City confirmed Guardiola’s appointment on a three-year contract on Monday, ending months of speculation over where his next destination would be, with Chelsea and Manchester United also linked with him.

The Catalan, who said on Friday that the first contact with City came “in May or June,” faces the challenge of ensuring his final season at Bayern ends with success on as many fronts as possible, while ensuring he hits the ground running at the Etihad Stadium in the summer.

Asked how he would cope with that, he told reporters at a news conference: “I am like a woman, I can do two things at once. I can think of both situations, so it’s no problem for me.”

The dream scenario of rounding off his Bayern reign with a Champions League, Bundesliga and DFB Pokal Treble is still achievable, and Guardiola insisted his focus is very much on his work in Germany.

“I had my first talks with [City] in May or June,” he said. “When I am in England, I will say more about it.

“If people don’t trust me, then I can’t change that. I know this is new for Bayern Munich — a coach has never left them before, it has always been them getting rid of their coach. But I will be focusing on the team until my final day here, giving my best to the very last minute.”

As well as the inevitable questions about his move to City, Guardiola was also asked about his relationship with his players amid reports of dressing-room tensions at Bayern.

He called for more respect, insisting at the same time that he will not let anything interfere with his bid to win three more trophies before leaving the Bundesliga club in the summer.

“I’ve experienced it already at Barcelona,” he said. “We coaches don’t earn respect any more in the world, no matter what we say. There are important newspapers here who have yet to ask me any questions about football.

“Why don’t you write about all the many nice words I say to my players? Whenever I talk about my players, nobody is interested; I’m always being asked about other things.

“Journalists need to know what they are here for. I love to talk about tactics — three at the back, four at the back and so on. But I know how to handle it and I will do that for the next four months.”

Bayern director of sport Matthias Sammer had weighed in on some of the recent criticism by protecting Guardiola at a news conference earlier this week.

Guardiola shrugged that off on Friday, though, saying: “Matthias was not defending me, he was defending the club. I can defend myself.”

Guardiola also dismissed rumours in German media that Arturo Vidal was drinking during the club’s winter training in Qatar.

“We were in Qatar and in the Arab countries alcohol is prohibited,” he said.

Lukaku is an example of Everton squad’s character – Martinez