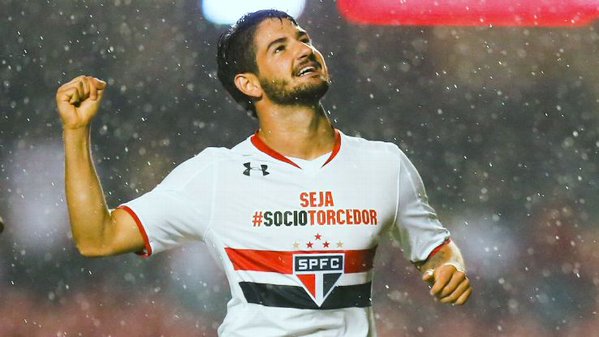 Guus Hiddink insists Alexandre Pato will have time to make a significant impact at Chelsea despite admitting the Brazilian has arrived at Stamford Bridge in preseason condition.

Pato joined Chelsea on a six-month loan deal in January and has been included in the Blues’ 25-man Champions League squad at the expense of Radamel Falcao, who remains a long-term absentee with a “very serious” thigh injury.

The 26-year-old was not involved in Chelsea’s 5-1 FA Cup fourth round win over MK Dons or Wednesday’s goalless draw away to Watford. Hiddink says his new striker — who played his last competitive match for Sao Paulo on Nov. 28 — is nowhere near match fit and has been placed on a tailored intensive fitness regime at Cobham to improve his condition.

Chelsea have just 14 Premier League matches left to play this season, but speaking at a news conference ahead of Sunday’s clash with Manchester United, Hiddink said he remains confident Pato will reach full fitness in time to make a meaningful contribution to the Blues’ domestic and European campaigns.

“Pato is in his preseason and we have made a training plan which he is doing now every day, training at least once and sometimes twice so he is getting his fitness, but he is not at full fitness yet,” Hiddink said.

“He will not be in for the upcoming games. We want him fit and don’t want to risk injury for this tough league.

“He’s skillful, that’s what we know. Technically very good, ambitious of course, but he needs more physical fitness. He played his last game on Nov. 28 and then holiday so it is a kind of preseason for him. We can’t go over the top.”

Asked if Pato will have enough time to make an impact at Chelsea, Hiddink added: “I think so but it is good to have him on loan as the club has not offered him a longer deal. It is good for us both.”

Hiddink confirmed that Loic Remy will not be available for Sunday’s match as he continues to battle a persistent thigh injury, but Chelsea expect the Frenchman to return to full training next week.

Pedro is being assessed by the club’s medical staff after picking up a minor groin problem.

Share this on WhatsApp
Related Topics:Alexandre PatoChelseaEPLGuus Hiddink
Up Next