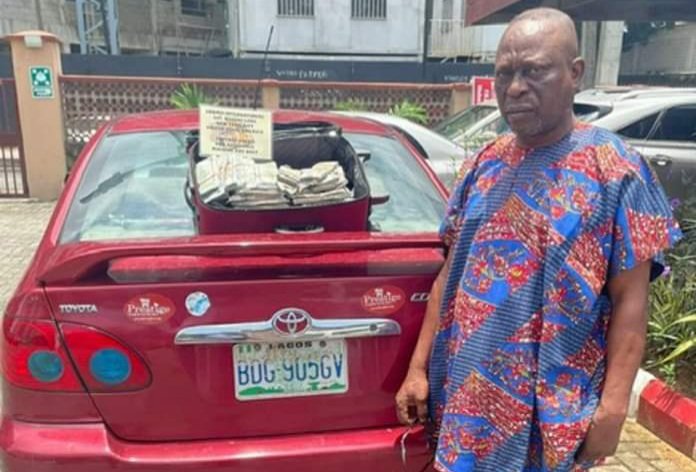 Olabanji Aluko claims he’s a driver, and if he’s honest for once, then he’s a fast one.

With fake $17.9m, the fraudster wanted to collect $5,700 genuine cash from his victim, Col Remi Adeyemo. But the retired military officer still trusted his instincts, and made things twisty for Aluko.

Explaining the scheme, Aluko , before his arrest on Wednesday, called for a meeting with Adeyemo at a popular eatery in Falomo, Lagos.

He had faked a father whose son was going through divorce in the US, and the son was selling his properties, and wiring the money home to avoid settling a huge alimony.

Aluko told Adeyemo they were once neighbours, way back, and he needed his help—to collect the lump sum, $17.9m, his son would first wire to Loomis International, a New York company’s account.

Adeyemo, in his statement to the EFCC, confirmed receiving a call in that regard, from Aluko.

The fraudster added that a code would be sent to him, which he would present before he could get the wire transfer.

But before then, Aluko called Adeyemo to pay handling charges of $5,700.

Adeyemo had a hunch then, and informed the EFCC.

Aluko who had been playing all the parts in the fraudulent drama, also acted the mule that brought the $17.9m cash—fake.

Now in the EFCC cage, the fraudster, the agency said, will soon be charged to court.