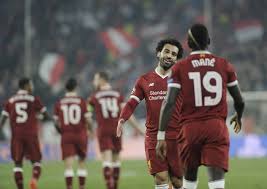 Share this on WhatsApp
Spread the love
By Boluwatife Ezekiel Olaleye
Liverpool forward Sadio Mane has rubbished reports of a rift between himself and team-mate Mo Salah.
Both players made the final three for the African Player of the Year award this week with the Egyptian coming out on top. Dortmund and Gabon striker Pierre-Emerick Aubameyang was the other finalist.
Mane was arguably Liverpool’s best player in 2016/17 but the arrival of Salah during the summer has seen his form drop off slightly.
Reports of a rift between the two wingers emerged earlier this season but Mane has said such rumours are far from the truth.
“We’re on the same team and we’re happy to be on the same team,” said the Senegal international. “We are happy to play together. We always enjoy to play alongside [each other]. We are looking forward.”
Salah enjoyed a superb 2017. His sparkling form for Roma earned him a big-money move to Anfield, where he has become Jurgen Klopp’s most effective forward.
The 25-year-old has also helped his country reach the World Cup finals for the first time since 1990 — he scored both goals in their 2-1 qualifying win over Congo, which sealed their spot at Russia 2018.
“I think we have a good national team and we did very well in the Africa Cup [of Nations], and qualification for the World Cup we did very well,” said Salah. “We deserved that.
“I am very happy and excited for the World Cup and I’m sure we will do something special.”
On his own career, he added: “Since I became a professional, I wanted to be the best player in Egypt’s history. I know what I want, I know how to do it, I’m working hard every day, improving myself. I think I’m doing well.”
Share this on WhatsApp
Related Topics:Liveepool FCMuhammed SalahSadio Mane
Up Next