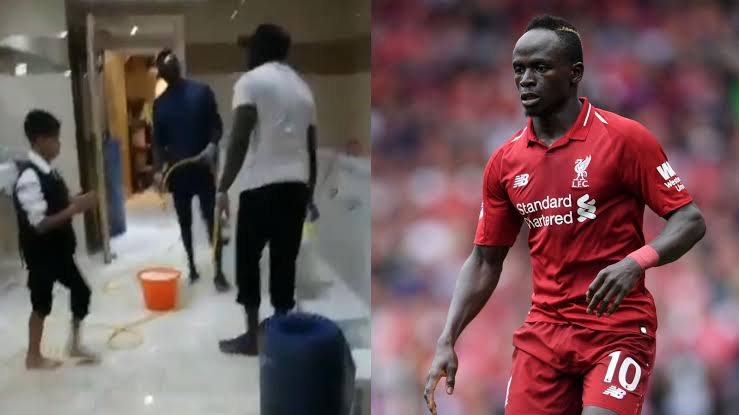 Sadio Mane has been filmed cleaning the toilets of his local mosque, it has been claimed.
Footage has been shared on social media appearing to show the Liverpool star joining in with the bathroom maintenance just hours after scoring against Leicester.
The Senegalese winger made it four goals in four games as the Reds continued their 100 per cent start to the season.
In the video Mane fills a bucket with water while a young boy uses a pressure washer on the floor.
Social media users have claimed the footage was shot at the Al-Rahma Mosque where Mane visits regularly, in Mulgrave Street, Liverpool.
After each of his goals the 26-year-old touches his head on the turf and prays – better known as the sujood.
It has not been officially confirmed that Mane is the gentleman in the video.
The Reds forward is known for his humble gestures, having donated £200,000 towards the building of a school in his village of Bambaly, Senegal.
“It’s an initiative that is close to my heart, he told the Liverpool Echo in April.
“It’s something that I am very happy to do. It’s important to help people.
“They approached me about the initiative, and it became clear I was maybe the right person to help.
“When they told me about it, I was very, very happy to help out. I’m looking forward to doing my bit.”

Share this on WhatsApp
Related Topics:Sadio Mane
Up Next