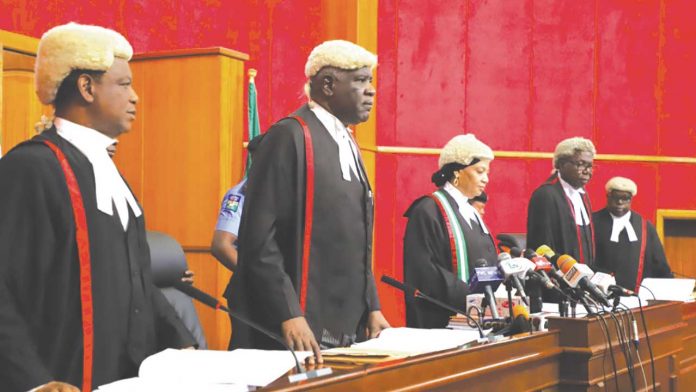 The Presidential Election Petition Tribunal (PEPT) has adjourned till May 22, 2019 for the People’s Democratic Party (PDP) and Atiku Abubakar to file a formal application, praying the tribunal’s Chairman, Justice Zainab Bulkachuwa to withdraw from the hearing of the petition they filed.

Atiku, who was the presidential candidate of the PDP in the last general elections, is, by the petition he filed with his party, challenging the outcome of the election, won by President Muhammadu Buhari of the All Progressives Party (APC).

The court had scheduled pre-hearing session in the petition for Wednesday, but when the case was mentioned, petitioners’ lawyer, Livy Uzoukwu (SAN) told the five-man tribunal that he has an application, which he would prefer to move in chambers.

He sought the understanding of other lawyers in the case, following which it was agreed that the tribunal suspends sitting and listen to the issue the lawyer to the PDP and Atiku wishes to raise.

After few minutes of arguments, it was agreed the lawyers, to the effect that each party be represented, in the chambers meeting, by three lawyers each.

Justice Bulkachuwa, who is also the President of the Court of Appeal, stood down proceedings to consider the petitioners’ application in chambers.

When proceedings resumed about one and half hours later, Justice Bulkachuwa disclosed what transpired in chambers.

She said Uzoukwu demanded that she rescue herself from the case in the face of a petition authored and addressed to her by the National Chairman of the PDP, Uche Secondus (who was equally in court).

Justice Bulkachuwa said since the issues contained in the petition and the petitioners’ requests were already in public domain, it was better a decision be taken in the open court after a formal application by the petitioners.

Uzoukwu said he would file a formal application to that effect on Thursday to enable the respondents file their responses on time.

Lawyers to the respondents; Wole Olanipekun (SAN) for Buhari; Yunus Usman (SAN) for the Independent National Electoral Commission (INEC) and Lateef Fagbemi (SAN) for the APC – later agreed with Uzoukwu to return on May 22 for the hearing of the application by the petitioners.

The respondents’ lawyers promised to file their responses before the next date.

Meanwhile, the tribunal has granted leave to another set of petitioners – the Coalition for Change and its presidential candidate, Geff Chizee Ojinika – the permission to serve their petition on Buhari and the Vice President, Yemi Osinbajo through substituted means.

By the permission granted the petitioners on Wednesday, they are to serve the two respondents through any national officer of the APC at the party’s headquarters in Abuja.

There was heavy security presence at the tribunal’s sitting venue on Wednesday, with vehicular movement restricted, by armed policemen, in and around the Court of Appeal premises.

While many supporters of the feuding politicians were denied access to the venue, security men only allowed senior lawyers and court staff to drive into the court premises.

Policemen used their vehicles to barricade the main access road to the court, forcing vehicles going from the Federal Secretariat to Force Headquarters, on Shehu Shagari Way, to take alternate routes.

Placards bearing protesters, who were allowed access to the court premises when the tribunal last sat on May 15, were turned back on Wednesday.

They could only protest from across the street, singing in solidarity with Atiku and the PDP.