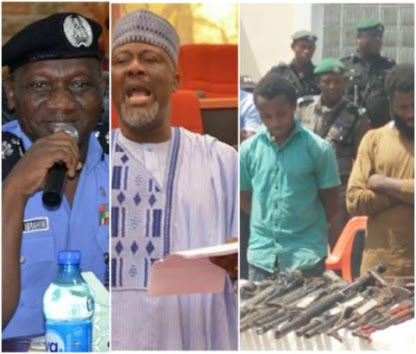 The street has also been blocked, according to Melaye’s colleagues visiting and the truckloads of IDPs protesting the siege on the senator they call a philanthropist.

Those in the building were initially prevented from going out. Visitors and guests were later allowed to enter and exit the premises.

As things are now, the police is not relenting until Melaye surrenders.

Deputy Force Public Relations Officer Adeniran Aremu said the lawmaker was indicted for possession of illegal firearms and has refused to honour police summons over the allegation.

“We have invited him twice, but he refused to honour our summonses. That is why we have sent our men to arrest him,” he said.

“They are at his residence and they will not leave until they have apprehended him.”

Melaye allegedly in 2017 sponsored a killer gang in Kogi– with a bag containing an AK-47 rifle, two pump action guns and N430,000.

The senator has denied the allegation, saying it is the handiwork of Kogi Gov. Yahaya Bello.

Tweeting on Monday as he lay low in the siege, Melaye alleged that the police had arrested his brother, Moses, and his friend.
He also said that his police orderlies had been withdrawn, and that there was a plan to kill him.

“One CP came and took them(police orderlies) away. There is also a plan to set me up again. But in God I trust. Truth will always prevail.

“We are in a civil society. No warrant and case is in court, yet this lawlessness.

“I’m a responsible Nigerian and law-abiding. There is a plan to kill me and I know about it. We are not in a banana republic. I cannot be silenced.”