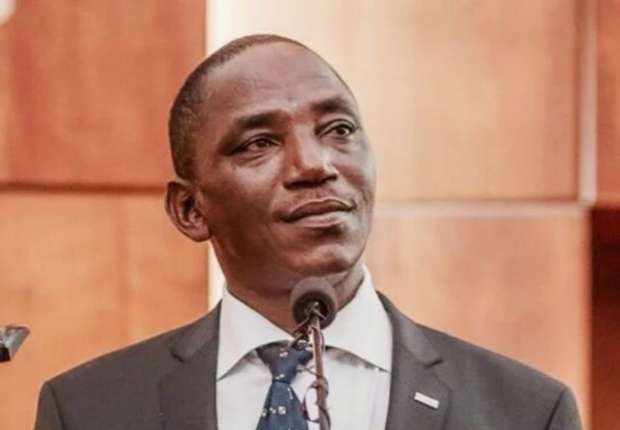 Some intrigues that are known to take place in the sports industry leave market observers wondering if some of the operators have a full grasp of what damage they inflict on the business of sport in Nigeria.

It becomes a cause for serious concern when the person on whose shoulder rests the responsibility to promote the health of the industry is seen to be contributing to the rot as the damager-in-chief whose every pronouncement and action has continually eroded confidence in the national sports business.

Since his appointment in 2015 as the Minister of Sports and Youth Development, Barrister Solomon Dalung has failed to articulate a policy direction but has been busy raising one controversy after the other in key sports federations and leaving in its wake, a damage that can take years to repair. As the coordinating minister in a country most of the football clubs and indeed sports associations are funded by state governments, it is expected that the minister would have been exploring how to harness efforts towards optimizing the contributions of the various levels of government.

Whilst he inherited the crisis in the Nigeria Football Federation (NFF), the red beret wearing minister from Plateau State has made no pretences about who he wants to run national football even as such a choice flies in the face of all known processes of election into the office and more critically, an aberration to global football regulations.

Dalung, a self-acclaimed expert in conflict resolution, has so far succeeded largely in creating conflicts in the Nigeria Basketball Federation (NBBF), Nigeria Gymnastic Federation, the Athletics Federation of Nigeria (AFN), the Nigeria Rugby Football Federation (NRFF) and of course, the conflagration that enveloped the National Youth Council (NYC) is well documented.
It is thus on record that it is during the tenure of the conflict resolution expert that sports federations and other departments under his ministry have parallel leaderships.

Dalung hasn’t restricted his untoward conducts to the ministry he supervises as it has been extended to government business where he has publicly dismissed a directive of the President issued through the office of the Attorney General of the Federation, his colleague in the Federal Executive Council. Rather than approaching his colleague to discuss the said directive of President Muhammadu Buhari on the lingering NFF crisis, Minister Dalung has chosen different media platforms to disparage the document from the Attorney General’s Office and by extension, making ridicule of the government by portraying it as lacking cohesion.

It is not surprising that football has been the most hit by the minister’s pretentious interventions in sports federations’ management. As earlier noted, his contributions in the Pinnick-Giwa contest of the leadership of the NFF has at best been to add to the crisis. In his pretense of seeking a resolution of the crisis, a committee led by a former NFF President, Ibrahim Galadima was instituted to mediate but finding its recommendation not in tandem with his set objective, Dalung kept the report on the shelves to pursue his agenda of foisting Christopher Giwa on the NFF Board.

Not satisfied with the brilliant job done by the Ibrahim Galadima , the report which is already gathering dusts like several others before it, Dalung went ahead to set up another committee led by yet another former NFF Chairman, Col. Abdulmumini Aminu  (rtd) to embark on the same mediation voyage whose report may also go the way of the Galadima report. Yet on another front, Dalung will wave a court injunction empowering Giwa and his group to resort to anarchy by forcefully taking over the offices of the NFF. Dalung’s antics are akin to a man who goes into the bush to strike a cutlass and jumps onto the road to shout who is striking the cutlass.

The minister has seized every opportunity no matter how remote to pillory football administration and yet he also seizes the slightest chance to amass benefits and luxury accruing from that sector. He was at the Falconets camp recently and flew back to the country to attend the recently concluded African Senior Athletics Championship in Asaba and has returned to France for the FIFA U-20 Women Championship where he has promised a $10,000 reward. How much is a minister’s earning for this obscene display of spending? Again, It is difficult to ignore how Dalung treated the viral world to the spectacle of having the Falconets kneel before his imperial majesty to receive cash gifts, something an accounts officer in the ministry could have been detailed to do discreetly without making it a social media event.

It raises the question about a minister who insists that a non-existent Supreme Court judgment is superior to global football regulation but he won’t stay away from tournaments organised by FIFA and governed by the same regulations he is busy spurning to advance his case for the disruptive Giwa group. He waved the said Supreme Court judgment recently on Channels Television and claiming it was in the interest of the country not to enforce it before the World Cup in Russia because he obviously knew he FIFA would ban Nigeria.

Dalung put on show his belligerence at the 2015 Annual General Meeting (AGM) of the NFF at the Best Western Hotel in Victoria Island, Lagos when as the Special Guest of Honour, he ended his speech by asking for a full audit of the football house account after dropping unsubstantiated allegations of financial impropriety. Despite making such weighty allegations, he continued working with the board, accompanying them especially to international trips for obvious personal pecuniary gains.

For a government officer who lays much stock in accountability and probity, we have been expecting the minister to explain why he offered to return 50 percent of the $150,000 to the International Amateur Athletic Federation (IAAF), money which was wrongfully paid into the account of the AFN during another crisis instigated in the federation. What happened to the full money and what will become of the other $75,000?
Still on probity, the Minister spearheaded a fund raising for the Super Eagles towards the World Cup in Russia and more than one month after Nigeria exited the tournament, should he not be providing detail of how much was raised and how it was spent? Equity, they say, must be approached with clean hands.

When the League Management Company (LMC) came on stream some years back it offered a flicker of hope that the sagging league will get a revival given the attendant internal conflicts that grounded its successive administrations.

A lot of grounds have since been covered amidst some extraneous setbacks. It is these externally induced hitches that have continually inflicted the most blows on the efforts to give the Nigeria Professional Football League (NPFL) a deserving lease of life.

While the LMC is still grappling with means to rebuild and retain sponsors’ confidence, there came this ill-informed statement credited to the Sports Minister alleging that outcome of league matches are pre-determined. That is the most uncharitable speak that can come from a man bestowed with the responsibility to oversee the administration of sports in a country and who is expected to promote the well being of individual sports spheres to generate Jobs, engage youths and win laurels for the country.

Such unfounded claim coming from an authority like the minister is a disservice to not just the NPFL but to the football industry in the country. We have in Dalung, a minister who is yet to become conversant with the domestic league which he has hardly made out time to watch. It is left to be seen what he has done from the federal government side to support and boost the league. But this same minister will hop into a plane to go watch the CAF Nations Championship (CHAN) in which Nigeria is represented by players recruited from the league he has snubbed since coming into office.

Over the seasons, the LMC and the NFF have imposed stringent sanctions on those found guilty of rules violations. There are different layers of checks and monitoring put in place by the League in liaison with the NFF and these include Referees Assessors, Special Delegates, the Referees Appointment Committee and the Integrity Unit of the Federation that have ensured that in consonance with FIFA Integrity regulations, conflict of interests are eliminated in decision making processes. It would be in the overall best health of football for the minister to work with the football administrators to flush out, if any, persons who may be bringing the game to disrepute.

The minister’s claims that corruption is the reason NPFL clubs lose early in continental competitions lacks merit as there are over 50 leagues that register for each of the two CAF club championships. The fact on ground is that with the exception of just one club from DR Congo and South Africa, North African clubs have bestridden CAF Club competitions dating back to the 1970’s. The stories of Rangers, IICC Shooting Stars, Abiola Babes, Iwuanyanwu Nationale and Leventis United to name a few are well documented.

There were few moments of glory with Enyimba’s triumph in 2003 and 2004 the high point. Yet anyone knowledgeable in the workings of International club competitions can discern that it is a function of good club financing, planning and management. So far only a few countries have such clubs and have been dominating the continent. But because this fundamental is not in place just as in other clubs in the rest of West Africa, East and Central, occasional flashes are recorded as we saw with Enyimba.

It is indeed a huge tragedy that Dalung would in time to come leave the sports industry where he has the singular record of being the longest serving minister with nothing to show. Leadership is beyond grandstanding, irreverent talks and abuse of authority which have all combined to be the style of Minister Dalung.

Dalung is a minister of the Federal Republic and should rise above beer parlour talks that diminishes public confidence in his esteemed office.