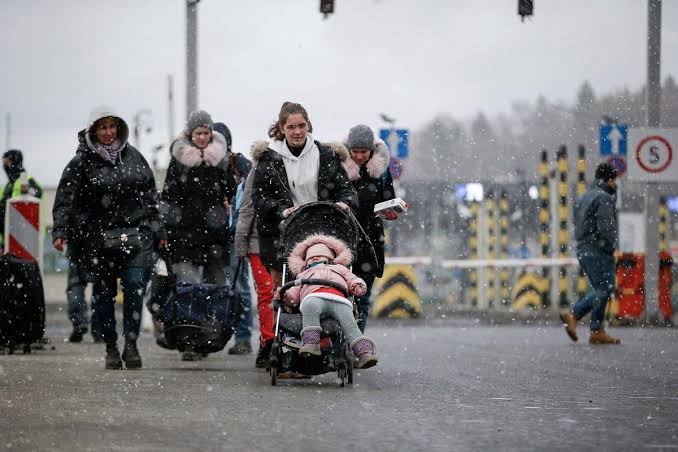 Fresh measures to help Ukrainian refugees fleeing the Russian invasion are likely to be introduced, the Defence Secretary said, as the UK Government came under pressure to act.

Ben Wallace said on Monday that the move to allow immediate family members to join Ukrainians settled in the UK is only a “first step” as Vladimir Putin’s assault continued.

Wallace dismissed the Russian president putting his nuclear forces on heightened alert as being a part of the Kremlin’s “battle of rhetoric” rather than a real threat.

With western sanctions biting, the Russian central bank was forced to sharply raise its key interest rate to save the rouble from collapse as the war worsened the humanitarian crisis in Ukraine.

The UK Government announced the relaxation of visa rules for immediate family members of Ukrainians settled in the UK after coming under intense criticism over the weekend.

However, Labour has called for ministers to immediately extend the opportunity to wider relatives before setting out a “broader sanctuary route” to help other Ukrainians.

Wallace said he does not doubt the UK would go further to match the “very generous” schemes that have helped in other conflicts.

“I think what I would say is, you know, our track record so far, both with Afghans and (the) Arap (Afghan Relocations and Assistance Policy) scheme, and indeed with the Hong Kong nationals who were suffering persecution, has been actually very generous.

“So there’s no reason to doubt that we won’t continue on that path,” he said.

He said it was not yet clear whether the European Union’s approach would be to support refugees on the border, with the hope they would be able to return to Ukraine soon.

He added that the UK response would be discussed at a Cobra meeting on Monday.

2023: Why Tinubu may step down from the presidential race