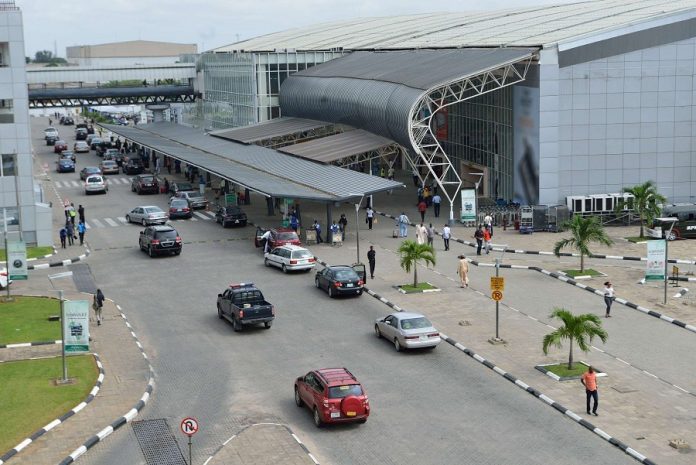 All over the world, pick up and drop off points are common places at both local and International Airports.

Having your car parked at the Airport is to enable you to arrive early and wait for the flight to land and as soon as your passenger arrives, you drive to the pick up area to pick the person who is already waiting.

Even when you book Uber anywhere in the world, such cars will pick you at the designated pick up points.

Some Airports have different levels of pick up areas depending on Airlines.

That you can find at Chicago and some other notable Airports with three level arrival points.

To my surprise, I found disturbing signs at the MM2 drop off and pick up area in Lagos and I kept wondering for hours whether it was a dream or real .

“Drop Off Only.No Pick Up”.

Honestly, I first read it to mean, Pick Up and drop off only.

Then I investigated as fast as I could to know  what was going on and see what I found.

2.I saw some merciless thugs (so to say) holding some iron with about 15 nails on a flat portion to place right in front of your tyres if found to attempt to pick up a passenger and there you get arrested and if you move, the nails will destroy your tyre.

3.The aim is not to stop you from making the attempt but to arrest you and of course make you pay a penalty…Hence the yellow signs are actually to say can’t you see the signs.Nonsense.

10.I drove to the car Park to see it for myself. Oh….The policy is working so well. Meaning that, you will be creating heavy traffic for Lagosians around Ikeja as everybody will first of all have to drive in and park first; when people actually need to drive from their houses and just come to a pick up point.

So many lawless policies and shameless actions from non State actors in my country.

I saw people who didn’t use the elevator or probably parked at level 1 dragging their bags with pains to cross to the other side when their cars were parked waiting for them.

Is that Buhari or Osinbajo again? No. We the people.

We need to change this nonsense way of life.

Imagine a country where Business men and women cannot move goods freely on the road…Road Safety people, VIO and others will stop their vehicles and delay them over some unreasonable policies as if we live alone in the world and we do not want to follow the pattern of International Best Practice on Ease of doing business.

Government should ensure that citizen’s welfare comes first in any law or policy they make.

Dr. Gbenga Adeoye holds a Bachelor’s Degree in Law.( LLB), MSc. in Banking & Finance and a PhD in Management Accounting. He also holds a Diploma in Criminology and Security studies.