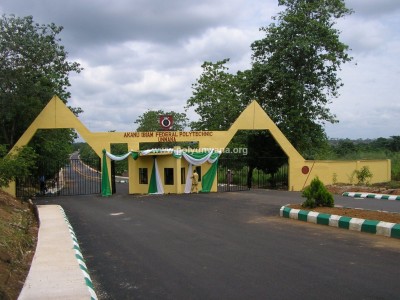 The National Association of Nigerian Students (NANS) has given the management of Akanu Ibiam Federal Polytechnic Unwana (PolyUnwana), Ebonyi State, 24 hours  ultimatum to resolve the strike embarked upon by the Academic Staff Union of Polytechnics (ASUP).

NANS President, Chinonso Obasi, in a statement on Tuesday in Abuja, said that the strike by PolyUnwana Chapter of ASUP, had lingered for a month.

Obasi said that if the strike, which was started when students were about to commence semester examination, was not called offwithin 24 hours, the school would witness mass action by students.

“It is quite embarrassing to note even when students are about to commence semester examination, ASUP did not give any iota of consideration to the student’s plight before embarking on the strike.

“However, in my telephone conversation with the ASUP Chairman, PolyUnwana chapter, Mr Nwuro Carl, he said that the strike never got his approval as it was politically motivated to smear the administration of the rector.

“At the expiration of the 24hrs ultimatum, failure to call off the strike and commence academic activities/semester examinations, the National Secretariat of NANS will be relocated to the institution for further actions as students shall not continue to be at the receiving end,’’ he said.

The NANS president, nonetheless, urged the Rector of the institution, Venerable Ibe Enwo, to deploy dialogue as means of fostering industrial harmony in the school.

Obasi said it was regrettable that PolyUnwana remained one of the few institutions in Nigeria where 80 percent of the students lived outside the school premises due unavailability of hostel space.

He said that the students’ cafeteria was nothing to write home about.

Obasi added that it was worrisome that with a vast expanse of land, infrastructural development was still very low in the institution.

Due process renders many jobless at Nigeria’s embassy in Washington

Osinbajo reiterates FG’s commitment to rebuilding communities in Benue, others