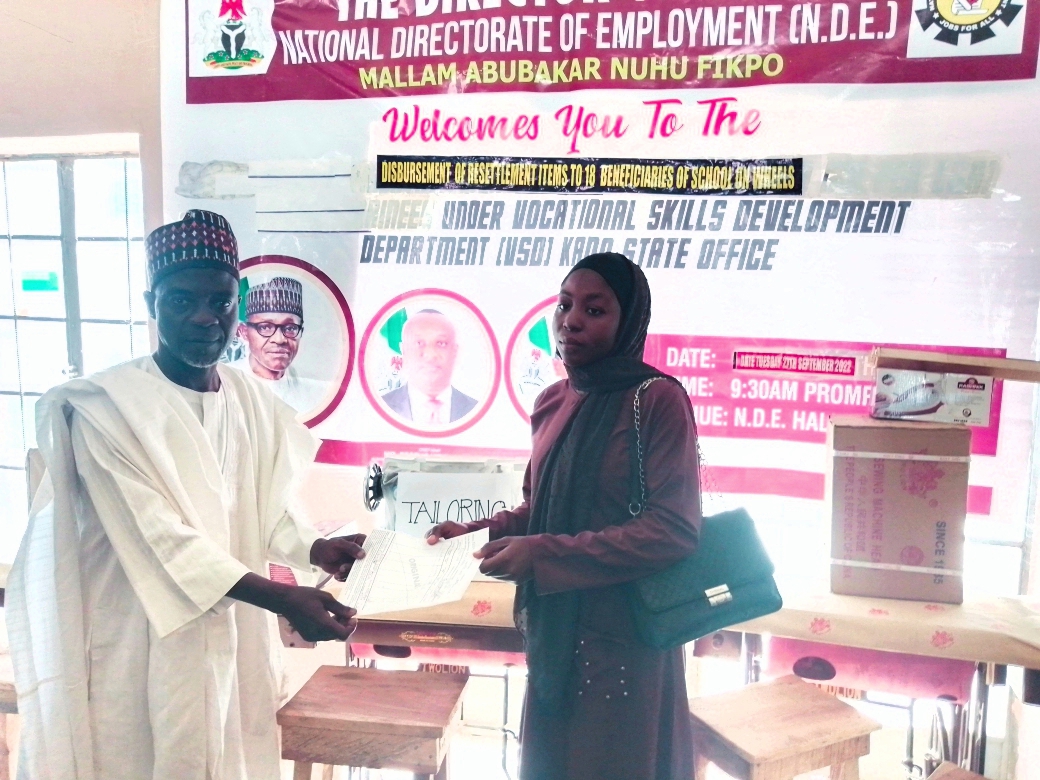 Share this on WhatsApp
Spread the love
The National Directorate of Employment (NDE) on Tuesday handed over resettlement equipment and tools on loan to 18 beneficiaries of  its School On Wheels scheme (SOW) in Kano.
NDE’s Director General, Malam Abubakar Fikpo, while handing over the packs to the beneficiaries, said that the organisation would continue to work at reducing unemployment in the country.
“The beneficiaries have all undergone in-depth training in various skills. Today, we are giving them tools and equipment, relating to their skills as loan packages.
“The objective of this project is to establish competent artisans who, would in turn, become self-employed and further create wealth and reduce poverty.
“I urge the unemployed youths in Kano to continue to avail themselves of the opportunity provided by NDE to acquire skills,” he said.
Represented by Kano State  NDE Coordinator, Alhaji Inuwa Adamu, Fikpo added that the organisation was desirous to engage more  unemployed youths in skill acquisition training programmes.
Fikpo expressed optimism that such training programmes would enable the youth to set up their own businesses.
The  director general said that the 18 beneficiaries had been trained in tailoring, leather works and GSM repairs.
The Head of Department, Vocational Skill Development, Malam Balarabe Danjuma, said the training  was meant  to make the beneficiaries  become self-reliant and job providers instead of job seekers.
Danjuma enjoined the beneficiaries to  make judicious use of the equipment and become self-reliant.
Some of the beneficiaries, who commended NDE for giving them the opportunity, promised to share the knowledge with others and make good use of the equipment.
Share this on WhatsApp
Related Topics:
Up Next