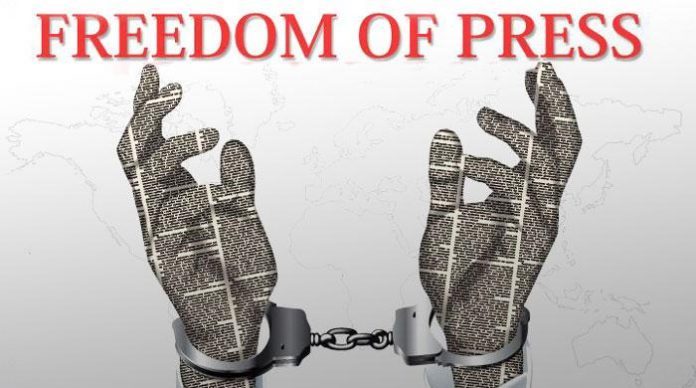 The Nigerian Guild of Editors (NGE), on Monday congratulated all journalists in Nigeria and across the world for keeping faith with the tenets of the profession despite numerous challenges, on the occasion of this year’s World Press Freedom Day.

The NGE particularly celebrated journalists in the frontline of Covid-19 pandemic coverage as well as those charged with the responsibility of reporting crime and security, at a time like this when the nation is struggling to contain the scourge of insecurity. The Guild urged media owners, the private sector and the government, to provide special protection for journalists, as most of them are often neglected and exposed to sundry challenge, that not only impair their ability to discharge their duties, but also imperil their lives, culminating, in some cases, to untimely deaths.

World Press Freedom Day was proclaimed by the UN General Assembly in December 1993, following the recommendation of UNESCO’s General Conference. This special day was inaugurated to act as a reminder to governments, of the need to respect their commitment to press freedom. Besides, it also places a responsibility on media professionals to reflect on and adhere to the principles of best practices that promote professionalism, ethical reporting, and public-spirited advocacy.

The theme for this year’s World Press Freedom Day is: “Information as a Public Good,” which highlights the necessity of governments, state actors and the private sector to recognise the value of information as a critical element in leadership and service delivery. Much more, the theme places a great deal of responsibility on governments across the world to accord respect to journalists, the conveyors, and disseminators of information, as partners in development, and not as enemies of the state.

It was noted that Journalists across the world face grave challenges and dangers in the discharge of their duties. “Some have paid the supreme price while others have been harassed and jailed for doing their lawful duty. This is because most governments still perceive journalists as intruders into the public space,” the NGE stated.

The International Federation of Journalists, the largest global body of journalists from over 140 countries said that 66 journalists were murdered in 2020. More than 1,000 journalists have died from covid-19 in 73 countries since the start of the pandemic. Last month in Geneva, Switzerland, the Press Emblem Campaign (PEC), another global defender of press freedom placed the daily average at more than 2 to 5 journalists dying per day from the pandemic.

The Committee to Protect Journalists (CPJ), reported that 274 journalists were jailed in 2020 for doing their job of treating information as a public good. In Nigeria, several journalists have suffered harassment, some detained arbitrarily while some were murdered in cold blood by unknown assailants.

In 2020, alone, no fewer than 60 journalists in Nigeria faced life and career-threatening challenges in the form of intimidation, arrest and detention. Three journalists were killed within the same period, one by security forces during a protest in Abuja and two by unknown gunmen in Adamawa and Nasarawa states. Aside attacks on journalists, their offices were not spared. Several media outlets were attacked and torched by irate mob during the #ENDSARS protests, with four media outlets fined for their coverage of the protests while others were fined for airing dissenting opinions.

The Guild condemned very strongly these attempts at muzzling the media.

The Guild urged governments at all levels in Nigeria to value information as a public good and treat the conveyors of information as partners, instead of seeing them as enemies.

The NGE declared: “The media is a partner and a critical stakeholder in the national project. The media played a major role in the struggle for Independence and enthronement of democracy.

“Therefore, the media cannot suddenly transform to agents of destruction of the institutions it helped to build.”

It was observed that information as a public good is the wheel that drives democracy and its attendant virtues including openness, free speech, and other forms of civil liberties. The harassment of the media by the National Broadcasting Commission, the police, DSS and other state actors should stop, NGE said.

The Guild called for a review of the National Broadcasting Code and all other media statutes, to bring them in tune with democracy and the promotion of free speech.

The Body of Editors urged the Nigerian government to, at all times, strive to protect the media. “It is only then that ‘Information as a Public Good’ would become relevant. Stop the detention, impunity, harassment and killing of journalists. Our product (Information) is a public good,” NGE declared.

The Guild aligned with the UN and other world bodies in calling for the release of all journalists in detention. Nigeria, and indeed the world, needs a free press to promote democracy, effectively report the pandemic and other issues threatening human existence, including insecurity.

The Guild commended the Federal and State governments as well as all relevant health institutions and personnel for their spirited efforts at containing the Covid-19 pandemic.