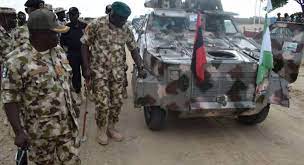 Major General Musa said that the “80,000 now,” surrendered Boko Haram terrorists and their family members in military custody, showed an increase of 30,000 surrendered terrorists over the 50,000 repentant terrorists that earlier surrendered their arms.

General Musa speaking from Maiduguri in a media interaction, was cited to have narrated: “When the terrorist comes out from the bush, he reports to the closet unit. The commander takes him with his men, and then he is profiled and disarmed.

“The state government provides the transport that they take them into Maiduguri where we have three camps. The fourth camp is being constructed. We are not the ones directly in charge of the administration and management. The state government takes care of all of them.”

Major General Musa also said that Chibok community has been liberated from the Boko Haram and ISWAP terrorists by the military in collaboration with other security agencies. He, however, admitted that about 97 kidnapped schoolgirls are still in captivity of the terrorists, though, the military rescued 10 in 2022, but said that efforts ongoing to rescue them.

According to the Theatre Commander, “Chibok is back freely, Chibok is free. People are back to their farms and we are sure of getting a bumper harvest this time around.

“This year we have been able to rescue about 10 Chibok girls. We are making sure that we put in much effort to recover all the girls. As of the last count, we have about 98 of them. With the last one, there are 97 still unaccounted for. Sure, with our operations, we are going to get those ones we can get out.”