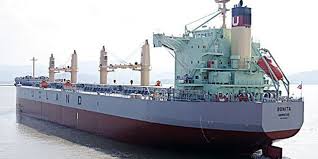 Sea pirates kidnapped nine crew on board a Norwegian ship sailing off the coast of Benin Republic.

Authorities in Benin were said to have narrated that the ship, MV Bonita, was anchored off the crew off at gun point.

Port officials were gathered the landing point into Cotonou Port at the time pirates invaded the ship and forced to have narrated that the dry bulker MV Bonita, belonging to Norwegian shipping firm, was boarded by the pirates while at anchor 14km from the entrance of Port of Cotonou.

The Cotonou Port Authority said the ship’s captain was among those kidnapped.

The authorities said that other crew members who are safe are being interviewed, as part of an ongoing investigation.