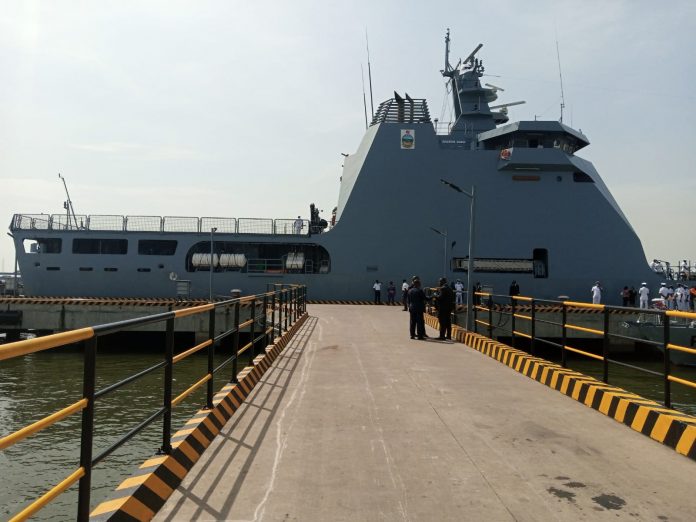 Share this on WhatsApp
Spread the love
After 56 days voyage from United Arab Emirate, she eventually berthed at the NNS Beecroft Jetty, Apapa on Friday morning.
Massive Nigerian Navy Ship KADA was built by Damen Schelde Naval Shipbuilding (DSNS) at Albwardy Damen Shipbuilding Yard in Sharjah, United Arab Emirate.
The Landing Ship Transport (LST) in the LST100 series of DSNS, had its keel laid on 9th December 2019 while she was delivered to the Nigerian Navy in March 2022.
The Chief of Naval Staff (CNS), Vice Admiral Awwal Zubairu Gambo, accompanied by the Flag Officer Commanding (FOC) Western Naval Command, Rear Admiral Wambai, GOC 81 Division Nigerian Army, NAFRC Commandant, DGs NIMASA and Waterways received her and boarded the ship for inspection which was led by the Commanding Officer of the ship, Captain Reginald Adoki. 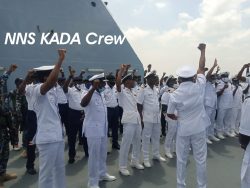 Vice Admiral Gambo applauded the crew, and added that her inclusion into naval fleets is a commitment of the Nigerian Navy to fight the vagaries of maritime crimes, sea robbers and pirates in the Nigerian Exclusive Economic Zone (EEZ) up to the Gulf of Guinea (GoG) maritime domain.
“On curbing the nuisance value of pirates, he warned the criminals that despite delisting Nigeria from the piracy prone countries on the 3rd March, 2022 by the International Maritime Bureau, the Nigerian Navy is poised to ensure that their presences at sea is sustained as the ship would invariably boost their efforts.
The Flag Officer Commanding, (FOC) Western Naval Command, Rear Admiral YB Wambai, observed that in the process of discharging its constitutional role, the force is faced with numerous challenges such as “crude oil theft, illegal, unreported and unregulated fishing, smuggling, arms proliferation, sea robbery and piracy amongst others,” but would strive to ensure that all the intractable challenges are mitigated to ensure optimal performance.
Elated Commanding Officer, NNS KADA, Captain Reginald Adoki, expressed satisfaction with the smooth seal of the ship to Nigeria after 56 days of voyage.
He captured it thus, “We had the opportunity to see the world in this voyage. It has been wonderful, remarkable and rewarding. You can see the morale of the crew is very high and we are looking forward to what comes next.” 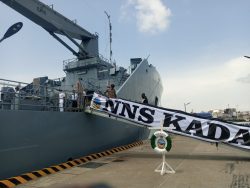 While appreciating the enormous efforts of the Chief of Naval Staff, Vice Admiral Gambo in repositioning the Navy, a former CNS, Vice Admiral Dele Ezeoba (retd) cautioned that the acquisition of NNS KADA (LST 1314) being about the biggest Landing Transport Tank in Africa, said enormous resources must be provided for maintenance.
“The Nigerian Navy must consider the requirements for sustainability of this platform and should put enough resources, at least, 40% of the cost of this ship every year for maintenance and that has to be appropriated by the National Assembly otherwise we would have a challenge in maintaining and sustaining this edifice.”
The building of this Ship is the outcome of the Nigerian Navy’s drive to reactivate its sea lift capability. The Ship is fitted with capabilities to conduct a wide range of naval security operations including amphibious operations, transportation and logistics. 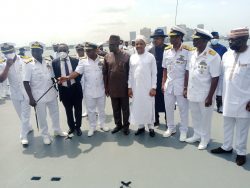 During her maiden voyage covering a distance of 8,414.34 nautical miles to Nigeria, NNS KADA’s paid port calls to five countries, which included Port Duqm in Oman, Port Mombasa in Kenya, as it made history being the first Nigerian Navy warship to visit Kenya on Saturday, 16th April, 2022 and Port Cape Town in South Africa.
Others were Port Luanda in Angola and Port Gentil in Gabon. The visits were in consonance with Nigerian Navy’s diplomatic role, and to consolidate the nation’s relations with friendly littoral states and allies.
“KADA”, by translation means Crocodile in Hausa language of Nigeria which depicts the amphibious role of the ship.
Share this on WhatsApp