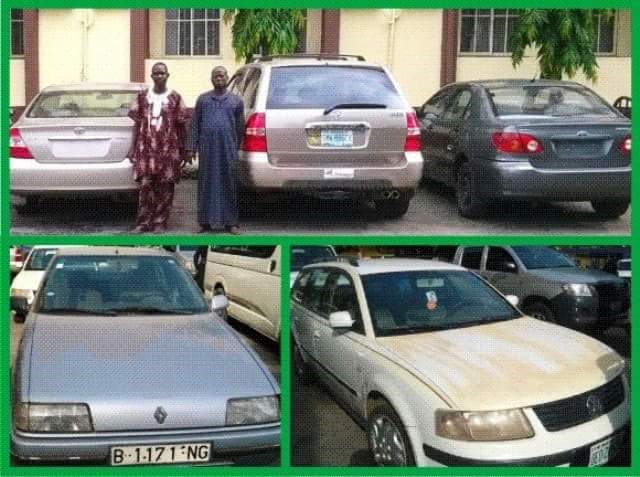 Detectives attached to the Rapid Response Squad (RRS) of Lagos State Police Command have arrested a notorious trans-border syndicate who specialized in stealing vehicles in Lagos and Ogun and neighbouring countries to sell.

The suspects, Samuel Adebeshin, 56, the receiver of the stolen vehicles, who lives at 13 Kobape Road, Abeokuta, and an accomplice, Adeyemi Kamoru, 50, who had eight stolen vehicles in their possession.

It was learnt that the operatives of RRS, who were working on a reported case of stolen Toyota Corolla from where it was parked in Ikeja Business District, Lagos, tracked the vehicle on Thursday night to a compound in Kobape, Abeokuta, belonging to a car dealer.

The Toyota Corolla, grey, and a 2004 model with registration number, KRD 759, belonging to Mrs. Olaitan Lawal, was removed from the car park during a church programme at Ikeja, at about 6:00 pm on Thursday before it was found around 1: 00 am on Friday.

The owner of the car said, “I took my car to the church and I parked it at the space designated for parking. After the church service, I went back to pick my car to go home, but I couldn’t find the car. Immediately, I called Lagos emergency line on 112 and I reported to the representative. As if that was not enough, I went straight to Area “F” in Ikeja, to equally lodge a complaint.

“The DPO linked me with the RRS Commander on his mobile number. I called him, he assured me that my car would be found. By this time, it was around 9:00 pm at night. At home, I couldn’t sleep until around, 12:15 a.m. after midnight I saw the Commander’s call requesting that I describe my car. I gave him, and he told me that he had found my car in Abeokuta.

“I couldn’t believe my ears. In about six hours interval, my car was found”, she added”.
It was further gathered that the RRS’ surveillance team moved to Abeokuta that same night and arrested two of the prime suspects who had confessed their connections with the recovered Corolla and seven other stolen cars presently at the RRS headquarters.

The suspects confessed to have stolen the eight cars at different locations in Lagos.

“I have been in auto business for 30 years. I know all these cars brought to me were all stolen cars but I thought I was safe enough here in my palatial compound.

He explained that about two years ago, I met Kamoru Adeyemi. He was the middleman between me and the car thieves. He was the one who introduced Alhaji Tajudeen and one honourable, both still at large, to me as car dealers and crossers from Benin Republic.

“Later on, I discovered they were car snatchers from Lagos. At that point, I couldn’t back out from the deal. Anytime they bring cars to me, it was Adeyemi who I give the money to pay them because I didn’t want people to identify me with them”, the suspected added.

“Also, in January 2015, I bought another Honda Accord 2000 model from them again; I also paid the thieves through our middleman, Adeyemi”.

Samuel Adebeshin, who is married to two wives with seven children, revealed building two houses, two flats and an 8-room bungalow from the shady business.

“I built my first house, an 8 room-bungalow in 2006, and the second one, two flats in 2015 where I keep the stolen vehicles as they arrive from Lagos. Once they bring the cars for me, we would repaint it, change their number plates and chassis numbers, and take them to neighbouring countries for sale.

He added that, “Occasionally, I sold to people at my car mart, S. Aro Motors situated at 1, Kuto Road, Isabo, Abeokuta. On this penultimate day, at about 5:00 pm on Thursday, Adeyemi called me that our boys have brought another Toyota Corolla for sale.

“I wasn’t at home, but I instructed my first son to open gate for them. The car was parked in my premises, awaiting the usual refurbishment and painting.

“However, about 12:30 am, a team of policemen came to my house and asked me to give account of the Toyota Corolla car. I opened up to them. I told them that all those involved are Adeyemi, Alhaji Tajudeen Bello and Honourable. They brought all those cars to me. I took the Police to Adeyemi’s residence where he was arrested while others were still at large”, he narrated.

On his part, Adeyemi disclosed that poverty pushed him into the crime. He confessed: “I met Adebeshin some years back. Before now, I do assist him to cross vehicle from Benin to Nigeria. Anytime those boys went for operation and succeeded, they will call me, and I will inform him that we have another car. And I will drive the car to his premises in Kobape where buyers usually come to buy them.

He explained, “In any deal we do, they paid me N30, 000. On this day, one of the car snatchers called me to meet them at Sagamu interchange. On getting there, I found out they have another stolen car.

According to him, “I led them from Sagamu interchange to Adebesin’s house. Alhaji drove the stolen car, while Bello drove Pontiac black colour. This was the first time I will be arrested in connection with stolen cars. It was poverty and frustration that led me to this criminal act”.

The Lagos State Police Spokesperson, Superintendent of Police, SP Dolapo Badmus, said the suspects are helping the Police in their investigations. She added that efforts are on-going to arrest other fleeing members of the syndicate