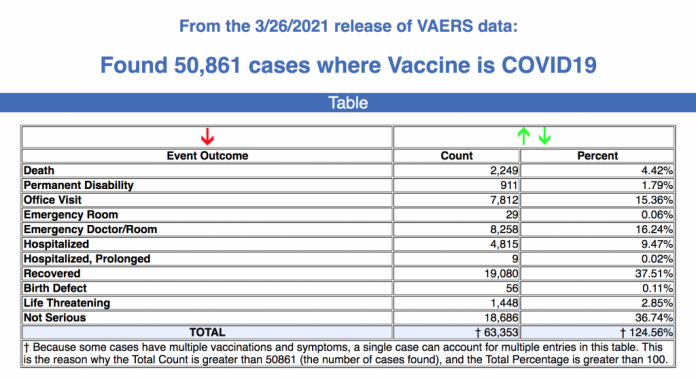 Data released today by the Centers for Disease Control and Prevention (CDC) on the number of injuries and deaths reported to the Vaccine Adverse Event Reporting System (VAERS) following COVID vaccines revealed steadily rising numbers, but no new trends. VAERS is the primary mechanism for reporting adverse vaccine reactions in the U.S. Reports submitted to VAERS require further investigation before a causal relationship can be confirmed.

Every Friday, VAERS makes public all vaccine injury reports received to the system as of Friday of the previous week. Today’s data show that between Dec. 14, 2020, and March 26, a total of 50,861 total adverse events were reported to VAERS, including 2,249 deaths — an increase of 199 over the previous seven days — and 7,726 serious injuries, up 631 over the same time period.

In the U.S., 136.7 million COVID vaccine doses had been administered as of March 26.

45% of those who died were male, 43% were female and the remaining death reports did not include gender of the deceased.

The average age of those who died was 77.7 and the youngest death was an 18-year-old.

As of March 26, 341 pregnant women had reported adverse events related to COVID vaccines, including 104 reports of miscarriage or premature birth.

There were 2,578 reports of anaphylaxis, with 53% of cases attributed to the Pfizer-BioNTech vaccine, 44% to Moderna and 3% to J&J vaccine, which was rolled out in the U.S. on March 2.

Using a broadened search for any reference to anaphylaxis in chart notes resulted in 15,193 reports, with 52% of cases attributed to Pfizer’s COVID vaccine, 45% to Moderna and 3% to J&J. With each vaccine, nearly 42% of anaphylactic reports occurred in people aged 17-44.

To date, the only information the CDC has published related to the investigation of COVID vaccine-related deaths and how those investigations were conducted is a COVID-19 Vaccine Safety Update via the Advisory Committee on Immunization Practices, published Jan. 27.

An interview in MedPage Today highlighted the shortfalls of the post-marketing surveillance of the COVID vaccine. Aaron Kesselheim, professor of medicine at Harvard Medical School and Brigham and Women’s Hospital in Boston, said we are seeing a lot of spontaneous reporting, a lack of formal post-approval studies because vaccines have only received Emergency Use Authorization and vaccines being given outside the healthcare systems — interfering with the ability to rigorously collect observational data.

Although the CDC and U.S. Food and Drug Administration (FDA) have various systems in place to monitor the safety of vaccines, they are not “up and running” and do not have adequate resources behind them, Kesselheim said.

According to Kesselheim, there’s essentially nobody keeping track of COVID adverse reactions in the U.S. and no long-term safety data, but emphasized that this new mRNA technology is “extremely effective and extremely safe.”

On March 8, The Defender contacted the CDC with questions about reported deaths and injuries related to COVID vaccines. We provided a written list of questions about how the CDC conducts investigations into reported deaths, the status of investigations on deaths reported in the media, if autopsies are being done and the standard for determining whether an injury is causally connected to a vaccine.

We also inquired about whether healthcare providers are reporting all injuries and deaths that might be connected to the COVID vaccine, and what education initiatives are in place to encourage and facilitate proper and accurate reporting.

It took the CDC 22 days to respond to our repeated inquiries. When someone did, the person told us the agency had never received the questions — even though the employees we talked to several times said their press officers were working through the list of questions and were reviewing the email we sent. We provided the questions again yesterday, and requested a response by April 7.

On March 31, The Defender reported on the increasing number of “breakthrough cases” of COVID in fully vaccinated people. Washington, Florida, South Carolina, Texas, New York, California and Minnesota have all reported breakthrough cases of COVID, some of which have resulted in hospitalization and death. Investigations are underway to determine if there were problems with the vaccines or if people had been infected with a variant.

When asked about the increasing number of breakthrough cases during a White House press conference, Dr. Anthony Fauci, President Biden’s chief medical advisor, said it is something they will take seriously and follow closely, but breakthrough infections happen with any vaccination.

CDC issues new travel guidance, vaccine passports stir controversyThe CDC today issued new travel guidance stating that fully vaccinated Americans traveling within the U.S. do not have to get tested for COVID before or after their trip, and do not need to self-quarantine when they return home.

On March 29, The Defender reported that the Biden administration and private companies are working to develop vaccine passports that would require Americans to prove they’ve been vaccinated against COVID as the country opens.

Dr. Naomi Wolf, founder and CEO of Daily Clout, said the passport system really isn’t about the vaccine. It’s about your data, and “once this rolls out you don’t have a choice about being part of the system.”

On March 26, New York launched a digital vaccine passport system known as Excelsior Pass that residents can use to prove they’ve been vaccinated or recently tested negative for infection. The New York system, built on IBM’s digital health pass platform, will be used at dozens of events, including arts and entertainment venues.

As The Defender reported April 1, 15 million doses of J&J’s vaccine failed quality control after workers at a Baltimore manufacturing plant negligently put an AstraZeneca ingredient in J&J’s COVID vaccine. The mix-up forced regulators to delay authorization of the plant’s production lines and prompted an investigation by the FDA.

On March 31, Business Insider reported that a 74-year-old Virginia man suffered a rare reaction to J&J’s vaccine that caused a painful rash to spread across his entire body and skin to peel off. Richard Terrell told local news station WRIC he began suffering strange symptoms four days after receiving the vaccine.

“I began to feel a little discomfort in my armpit and then a few days later I began to get an itchy rash, and then after that I began to swell and my skin turned red,” Terrell said.

The rash spread to his entire body and his skin peeled off. He went to the emergency room, where doctors determined that he had experienced an adverse reaction to the COVID vaccine.

AstraZeneca suspended in Germany and Canada

On March 31, The Defender reported that Germany indefinitely suspended use of the Oxford-AstraZeneca COVID vaccine for anyone under 60 following advice from STIKO, the country’s independent vaccine committee and external experts.

The committee investigated reports of blood clots, some fatal, in people who received the vaccine and decided to give the vaccine only to people 60 or older unless they belong to a high-risk category where the benefits outweigh the risk of a serious side-effect.

As The Defender reported on March 30, several regions of Germany, including Berlin and Munich, had temporarily paused the vaccine for people under 60 after Germany’s vaccine regulator disclosed 31 cases of a rare brain blood clot, nine of which resulted in deaths. The decision was made as a precaution ahead of a meeting with national medical regulators scheduled for later in the day where it was decided to indefinitely suspend the vaccine.

On March 30, Canada announced it was suspending AstraZeneca’s vaccine for people under age 55 following concerns it might be linked to rare blood clots, The Defender reported.

Health Canada demanded AstraZeneca conduct a detailed study on the risks and benefits of its COVID vaccine across multiple age groups, and suspended the vaccine for younger groups pending the outcome of that review.

Children’s Health Defense asks anyone who has experienced an adverse reaction, to any vaccine, to file a report following these three steps.