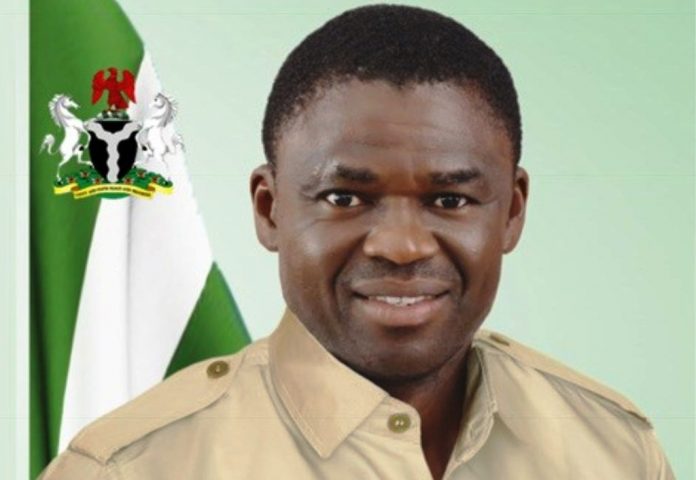 From OSEMWENGIE BEN OGBEMUDIA, Benin City
Edo State Deputy Governor, Rt. Hon Philip Shaibu, has lauded the Oba of Benin, His Royal Majesty, Ewuare 11, for consistently playing his fatherly role in the state, describing the revered monarch as symbol of unity and progress.
The Deputy Governor made the remarks when he joined the Otaru of Auchi, His Royal Highness, A. H. Momoh, Ikelebe 111 of Auchi sacred kingdom, other traditional rulers from Edo North and the immediate past Governor of Edo State, Comrade Adams Oshiomhole, to receive the monarch who was on a thank you visit to Edo North.
Hon Shaibu said the visit of the Benin monarch was not only symbolic but a significant one that would no doubt bring blessing to their land. “Our Great Oba’s visit is a blessing to us and with his prayer that Edo North will record bumper harvest this year and the symbolic rain that followed immediately is an indication of great things ahead”, he said.
In his welcome address, the Otaru of Auchi ,commended the Benin monarch for his reform agenda, especially, in the area of land use administration which he said has taken many young men out of laziness and ignorance.
He described the personality of the Oba as a well-groomed character of contentment and culture.
“Your historical ascension to the divine throne of your fore fathers has added colour to our culture. I welcome you on behalf of the Edo North traditional rules,” he stated. He pledged their continuous cooperation and loyalty to the Benin monarch.
Comrade Adams Oshiomhole, in a keynote address, also added that under the reign of Oba Ewuare 11, Edo people have remained one and more united than ever before.
ALSO SEE: Igbinedion gifts Oba of Benin seven-month-old tiger
The Benin monarch and his entourage, who were received warmly by the Edo North traditional rulers and their people, said his visit was to specially thank the traditional rulers and the people for their support throughout the process of his coronation as the 40th Oba of Benin kingdom on October 20, 2016.
He promised that Edo council of traditional rulers would soon be reconstituted so as to build a formidable traditional institution that will collaborate with government. He also solicited the support of the traditional rulers in the realisation of his objective and initiative to build responsible Youth and culture of hard work and food sufficiency.
The monarch promised to extend invitation to other ethnic groups in the state to actively participate in the historical annual Igue Festival. “This is necessary to consolidate on our historical traditions, ” he said.
He commended the state government for giving legal backing to his pronouncement on the activities of Community Development Associations (CDAs).
Different cultural troupes were on display to add colour to the ceremony.