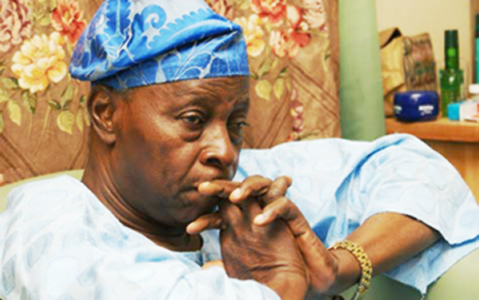 After waiting to clock 77 years old and achieved it yesterday, Falae supposed day of happiness turned sour as suspected gun men kidnapped him from his farm.

Falae, a former Secretary to the Government of the Federation and National Chairman of the Social Democratic Party (SDP), was said to have been kidnapped yesterday by suspected Fulani herdsmen on his 77th birthday.

The suspected kidnappers numbering 20 announced their arrival at the farm with gun shots at 12 noon injuring several workers before taking Falae away.

He was abducted on his farm in Ilado, along Igbatoro road, in Akure, the capital city of Ondo State while some workers were bruised before whisking him away to an unknown location.

The Director of Administration and Publicity Secretary of the SDP in the state, Mr. Remi Olayiwola, told newsmen
that “Baba went to his farm as usual in Ilado. The gunmen went to his farm where they attacked and kidnapped him,” Olayiwola said.

The kidnappers were said to have later contacted the wife demanding for N100 million before he would be released from their custody.

“The abductors have contacted Chief Olu Falae’s wife and they are demanding the sum of N100 million before they would
release him,” he said.

The septuagenarian, who is the former Minister of Finance in the administration of the Military President, Gen. Ibrahim Babangida and later became the Presidential Candidate of the Alliance for Democracy (AD) in 1999, was said to have been attacked before he was whisked away.

The State Police Public Relations Officer (PPRO), Wole Ogodo, confirmed that Chief Falae has been having running battles on the farm land for some months, galvanizing into the abduction on Monday.

What has become a high scale profile kidnappings in the South West Nigeria is becoming worrisome as it seems defiles police capability to curtail.

Last week, the wife of the DMD, the Sun Newspaper, Mr Steve Nwosu was abducted after a seven-man gang attacked the family house at Okonta. Toyin regained her freedom after the family were said to have paid some ransom to the kidnappers.

NNPC, 13 others exempted from TSA