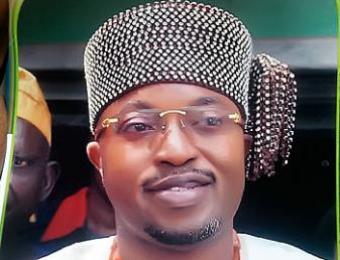 THE Oluwo of Iwo, Oba Abdul Rasheed Adewale Akanbi has lamented what he called “neglect” of Iwo history over the years.
Akanbi made the remarks while speaking with newsmen in the palace on his choice and appointment as the 16th Oluwo of Iwo.
The monarch who expressed displeasure over the development, therefore, called on Iwo indigenes both at home and in diaspora to come and invest in the town in order to develop and put the town in its rightful position in the country.
Akanbi who was presented with staff of Office on January 16th, 2016, recalled that the earliest settlement initiated by Adekola Telu, a prince from Ife, was the son of the 21st Ooni of Ife, a female called Luwo Gbagida.
According to him, Gbagida was so influential, acceptable and had supernatural power. “You can imagine how strong she was to have emerged a female Ooni. That is the spirit with which Iwo was founded.”
Akanbi explained: “The history of Iwo will be incomplete without looking at her historical antecedent. Available evidence and the tradition of origin attested to the fact that Iwo takes her origin from Ile-Ife. Iwo, like any other Yoruba-speaking people had originated from the cradle, Ile-Ife. In fact, its kingship has also been traced to Ife.
“Iwo is an indigenous town in Osun State and it has all the characteristics of Yoruba settlement. The Iwo people, like all other people of Yoruba stock are said to have originally belonged to Ile-Ife from where they migrated sometimes in the 14th century.”
He however, assured the people of his plans to work in partnership with the new Ooni of Ife, Oba Adeyeye Enitan Ogunwusi (Ojaja II) to improve the living condition of Iwo people and the people of Osun in general during his reign in the town.
The monarch, who had lived in Canada for several years before his appointment, expressed appreciation to God and to the people of Iwo land for their support during his three years litigation in court. Adegunodo, one of the ruling houses, had taken the Gbase ruling house where Oba Akanbi emerged to court for determination of who becomes the next Oluwo. Subsequently, the court ruled in favour of ‘Gbase ruling house which finally doused all tension.
“It is unfortunate that this history of Iwo has suffered neglect. That is why I said my coming is divine. I am the reincarnation of Telu. I am here to bring back the glory of Iwo land.
“That is I why said, I know the town has passed through some challenges. We are going to see to the end of those challenges. We are going to come together with the people to do it. But as the traditional ruler, I have made a vow to lead by example. I am going to open Iwo land to the outside world. God really bless us with human resources and we are going to leverage on this make Iwo land a hub of employment.

Share this on WhatsApp
Related Topics:Oba Abdul Rasheed Adewale AkanbiOluwo of Iwo
Up Next