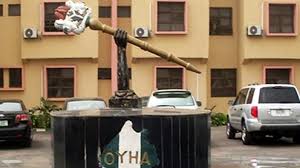 The opposition Labour Party (LP) has taken over the office of the Speaker of Oyo State House of Assembly after the death of former Speaker of the House, Right Honourable Michael Adeyemo, who died suddenly on April 27, 2018.

Accordingly, the Minority Leader of the House of Assembly, Olagunju Ojo, on Tuesday was elected and sworn-in as the Speaker of the House.

The Deputy Speaker, Musah Abdulwasi, presided over the plenary.

Right Honourable Ojo, LP-Orire, a former Deputy Speaker in the Fourth Assembly 1999-2003, was nominated unopposed by Joshua Oyebamiji, APC, Akinyele I, seconded by Gbenga Oyekola,  LP, Atiba, .before the consensus approval as the Speaker of the House of Assembly.

The Majority Leader, Kehinde Subair, at the Tuesday sitting, moved the motion for an election into the office of the Speaker.

Muideen Olagunju, Accord, Oyo East/Oyo West, had opposed the motion for election of a new Speaker, arguing that Constitution supersedes the Order of the Assembly.

Olagunju, citing sections 90, 92, 94 and 95 of the 1999 Constitution (Amended), contended that in the absence of the Speaker, the Deputy Speaker shall automatically take over.

Olagunju declared: “The section of the Constitution makes it clear that an election is unnecessary and also it is clear about transition to speakership in case of any absence or vacancy.

“The constitution clearly states that the deputy Speaker shall vacate his office and preside over the Assembly.”

Olusegun Olaleye supported Olagunju in opposing the election of a new Speaker while the Deputy Speaker is still in office. He maintained that a clear interpretation of the Constitution showed that the absence of a Speaker could also mean the death of a Speaker.

However, Solomon Akande, representing Ogbomoso-South, countered that the argument of Olagunju was irrelevant and was not applicable to the legislative arm.

According to him, that section of the Constitution was applicable only to the executive arm because the governor and his deputy have a joint ticket, while the same cannot be said of the legislature.

Fatai Adesina, Accord, Ibadan South East I, moved the motion that the argument on the floor of the House should be moved to the executive committee.

Adesina remarked: “There is always a lacuna in the Constitution and rather than airing our differences in public, we should resolve this at the committee level.”

The Deputy Speaker, Musah Abdulwasi, who presided over the plenary, subsequently, constituted a nine-member committee, including the two contestants, Ojo and himself.

He suspended the plenary for 20 minutes to allow the committee to reach a decision.

Thereafter, Abdulwasi acknowledged: “History is being made today and it is good that a section of the Constitution is put to the test and whatever decision we arrive at today, will be a subject of many legal debates…

“No sacrifice is too much for the attainment of peace.”

The Deputy Speaker subsequently, called on the Clerk of the House, Mr. Paul Bankole, to make a call for the election.

Share this on WhatsApp
Related Topics:Labour Party (LP)Oyo State House of Assembly
Up Next