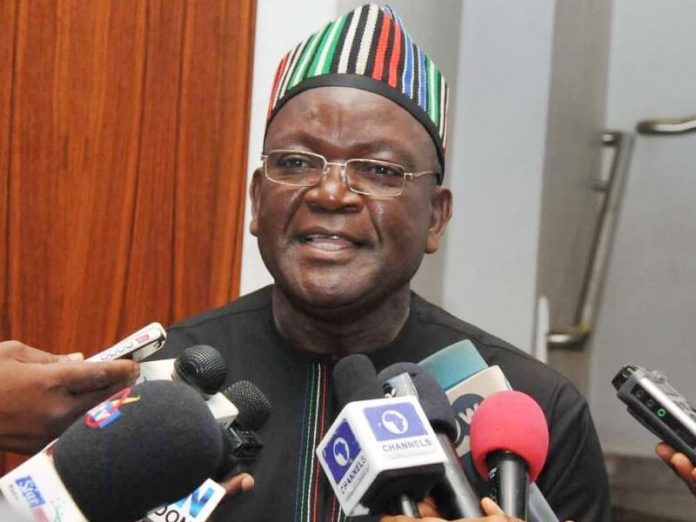 Governor Samuel Ortom says there are plans by some powerful people to destabilize Benue state through an invasion by Fulani herdsmen.

Ortom said report reaching him from the Guma Council boss, Anthony Shawon, said that the herdsmen had already taken over part of the area and were grazing freely.

According to him, “I have been told that after the operation WHIRL STROKE succeeded in chasing away the herdsmen, they have started moving into Guma again as (Tuesday). I have already informed the Ccmmander of OPWS and I hope security agencies will take up the matter.

“This is a deliberate plan to destabilise the state. What you saw at the Benue State House of Assembly was just the first phase. But as a law-abiding citizen, my duty is to do intelligence gathering and report to relevant authorities.

The governor, however, exonerated President Muhammadu Buhari from the political happenings in the state following his decampment from the ruling All Progressives Congress (APC).

Governor Ortom continued, “I believe President is not aware of happenings in the state but I expect him to call the Inspector General of Police and the Director General of DSS to order,” he said.

Earlier in his broadcast to the people of the state, the governor, while noting that he had committed no crime in defecting to another party, however, called on President Buhari to do everything in his power to protect the democracy that brought him to power.

He said: “I say this because the President is the ultimate head of all security agencies in the country. I call on our traditional and religious leaders, civil society organizations, mass media, Unions and all people of conscience, who love democracy to help avert the emerging impunity in our beloved state.

“Impunity is dangerous and destructive. Its negative effects on people and institutions can be very far reaching. If unchecked, its unexpected consequences will consume all, including those deploying it as an instrument of power. “I have committed no crime.”

“I assure you that we will not be deterred. What exactly is wrong in asking the people of Benue to ranch their cattle? The world is not waiting for us. If we don’t ranch now, we will be forced to do so soon because there will be no land to practice open grazing anywhere in Nigeria.

“What is wrong in changing party? When I left PDP some years ago to join APC, I was exercising my democratic rights. I have left APC back to PDP where I served for over 12 years at various times as executive committee member. I left as a Minister in the PDP government and joined APC but I was not persecuted.