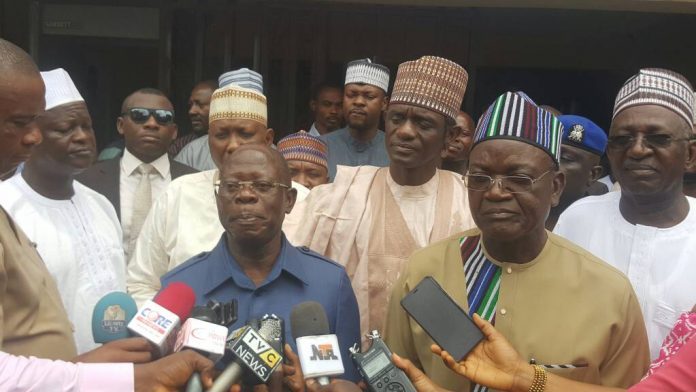 The two APC southern governors who allegedly set the DSS on their party chairman Adams Oshiomhole have drawn the fire of their colleagues.

And President Muhammadu Buhari was said to have ordered investigation into the DSS action—an action he did not authorise.

Oshiomhole on Sunday was interrogated for more than seven hours by the agency following petitions some disgruntled governors, who lost out in the party primaries, brought against the chairman.

But Amosun and Okorocha appear the worst losers, and have been publicly confronting their party’s national leadership, especially Bola Tinubu, for their losses.

The Ogun governor has his senatorial ticket because of the parallel primary he organised, and Okorocha, got his though, but could not install his son-in-law and Chief of Staff Uche Nwosu as the APC guber candidate.

The two petitioners among the governors were said to have alleged Oshiomhole took bribes from certain states to manipulate the 2019 elections.

And the DSS reportedly pressured the chairman to resign.

The former governor and activist, however, is  not the type that could be easily cracked.

Sources in the know said he dug in his heels, insisted he would only resign before Buhari.

The spokesman for the agency has denied knowledge of this.

DSS spokesman, Peter Afunanya, on Wednesday said he was not aware of the interrogation.

The party’s national publicity also said he had no such information.

“More so, the Chairman is not around in the country to confirm or deny this. As soon as we have any relevant information, you’ll be updated,” Lanre Issa-Onilu said.

But, according to sources, many of the APC governors were not pleased with the two governors who they said organised a “civilian coup de tat” to destroy the party for selfish reasons.